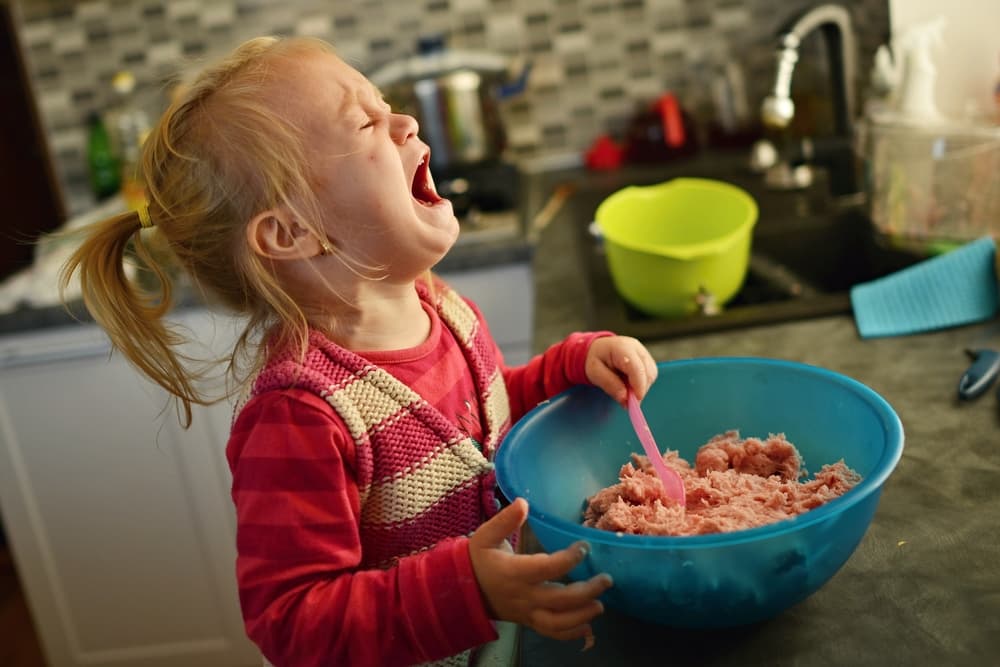 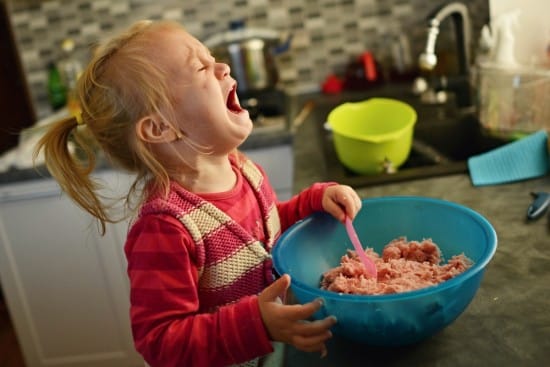 The terrible twos are no joke. You had this really nice toddler and suddenly, he or she is one big ball of NO. She just defies everything you ask her to do. Does the opposite of what you ask her. Has tantrums. In public. And yet it’s a perfectly normal period of development. Just really, really rough on both the child and his parents.

Two things can help you cope with the terrible twos:

Okay, so I lied. There’s one or two more things that can help get you through your child’s terrible twos and that is taking lots of deep breaths and possibly: screaming into a pillow.

So what’s up with the terrible twos? What causes this irrational behavior in your child? Well, there are a few factors that bring it on. But mostly it’s about a child realizing that yes, she’s a separate human being from her parents, but not quite understanding where her wants and desires begin and where your foot comes down and says no. She’s testing to see the limits of what you will allow.

The Terrible Twos: Your Reaction

That’s why your reaction to the terrible twos is so important. Your child’s behavior is all about provoking a reaction from you. The way you react is a lesson for your child. It’s how you teach your child her limits.

That’s what the terrible twos are really about: looking for limits. In coming to know her limits, your child finds security, and begins to feels safe. Safe within the world at large.

Years ago, my family had dinner with a neighbor. The neighbors had just one child, a boy of around 18 months (the terrible twos can kick in early). The child was cranky. Wouldn’t eat. Threw his food on the ground. Cried. Made a mess.

So his mom, my neighbor, put the boy in his bed, but he screamed, so she took him out of bed and brought him back to the table. Where he screamed some more and threw some more food.

So his mom put him back in bed and he screamed and cried and she brought him back out to the table.

It was a nightmare. My husband and I were already experienced parents. To us, the situation was clear: the boy was tired. He needed to sleep. But because he was in the thick of the terrible twos, he couldn’t agree to anything. Even if it was something he wanted and needed. Like sleep, for instance.

And so he cried and screamed wanting someone to be very firm and insist that he stay in his room and sleep. He needed someone to ignore him until he got the point: no one was going to let him come out and be at the table because he needed to sleep now.

I wanted to intervene. I wanted to tell the mother she was hurting her child more than she was helping him. But it wasn’t my place. So I kept my tongue.

It was a horrible evening. And that is why I remember it more than two decades later.

This wasn’t the same thing as what I wrote about recently: about the total extinction method in which infants are allowed to cry themselves to sleep. This was a different issue: this was a child sorely in need of limits, in fact begging for limits, and his parents, thinking themselves merciful, were actually being kind of cruel, but not letting the child know that enough is enough and that it was time to go to sleep.

The right thing, the kind thing to do here is to ignore the child’s crying for a bit. If he doesn’t settle down, you can try soothing him inside his room, preferably while he is inside his bed. But if he just gets more riled up, it’s best to leave and let him work it out, if he can, until he falls asleep.

We’re not talking about an infant here, who cannot possibly be testing his limits, but a two-year old, who is learning the path of independence: how to be a being on his own two feet, separate from his parents, responsible for himself. The terrible twos require firmness. The terrible twos require an unemotional stand from the parents. It’s not a contest of wills. It’s your way or the highway and you’re not going to let this small being move you from what you know is right.

In doing what you know is right, and sticking to it, your child will learn that what you insist on is right and proper and that will make him feel safe that hey, someone knows what’s what around here, even if he doesn’t.

The terrible twos are exhausting for you and your child. Sometimes your child will throw a tantrum because she thinks she should be able to do something that you do perfectly well, such as turn on the stove and cook an egg (!). Obviously, you are not going to let your child use the stove at the tender age of approximately two years old. But from her point of view, she sees you doing this task with no effort and cannot see why she shouldn’t be able to do the same. When you take her away from what you rightly see as a danger to her, she feels frustration and it makes her scream and cry. She wants to be independent and adult like you.

Sometimes, the frustration comes from trying and failing to do something safe. For instance, tying her shoes. She wants to do it, but her hands lack the coordination to make it happen. So bless her terrible two-year-old little heart, she tries and tries and fails. And then falls apart and has a tantrum from the frustration (thank goodness for Velcro).

Then there’s the communication issue. Sometimes a child in the thick of the terrible twos will want to ask you something or tell you something and she simply does not have the words to say what she means. If you’ve ever been to a foreign country where you don’t speak the language, you can understand her frustration. Not being understood? That’s a horrible feeling.

Of course, the sources of these frustrations do go away as your child gets older. Her motor skills will improve and so will her language skills. The terrible twos do have an end point, thank goodness.

Meantime, while your child is smack dab in the middle of the terrible twos, you need to know how to handle them. Here are some two things to remember:

During the tantrum stay calm—if you get upset she’s going to tantrum even harder because she wants to see your absolute limit—how angry will you get? How much attention can she get from you, negative or otherwise, with her outrageous behavior? If you ignore her and stay calm, she’ll stop. She’s found her limit (thanks to you for staying calm). Don’t laugh. Don’t make eye contact. Don’t even answer her. Just wait it out.

Offer comfort when it’s over—your child’s tantrum upsets her as much as it upsets you. It makes her feel out of control. She worries that if she behaves badly, you won’t love her anymore. When the tantrum blows over, have a cuddle. Tell her you love her. Then move on and do something else, for instance, bring out crayons and paper and have a draw-fest. Or just put out the crayons and paper and she’ll get the message that it’s time to draw (instead of whatever it was that caused the tantrum—thank goodness kids are distractable).

What about public tantrums? Like in the grocery store? Well, first of all, the terrible twos happen to most kids and parents, even if every single customer in the store is staring. So it’s interesting. Yup. That’s why they are watching. They want to see how you deal with the terrible twos (they already know how they dealt with it!). Try to remember that. It’s not about them thinking you’re a terrible mother. It’s about them watching something interesting.

Second of all, you may be able to just distract your child by giving him something interesting, like your car keys or a toy. Or you might be able to give him a hug and talk him down from the tantrum by speaking about something else (anything other than the thing that’s bugging him) calmly. But whatever you do, don’t give in if he’s asking for a candy bar and you don’t want him to have it. If you give in and let him have it, he’ll demand it the next time and the time after that. Remember: the terrible twos are about seeking limits.

The Terrible Twos: Coping With Tantrums

The terrible twos come with tantrums. But you may be able to cut down on the number of tantrums your child has by cutting out triggers. That means making sure your child gets enough sleep, is fed when he’s hungry, isn’t allowed to become bored, and isn’t given frustrating tasks that are too difficult for him to perform.

Another good way to eliminate the battles that come with the terrible twos is to offer choices. You might ask your daughter whether she’d like to wear the green dress or the blue one today or whether she’d like hamburgers or hot dogs. In giving her choices, you’re giving her a measure of control over her life and that’s something she’s desperately seeking: control. Ask open-ended questions, that is to say, questions that are not answered with yes or no but with full answers. “What would you like to do now?” “Where shall we go for our walk?” “What’s your favorite color?”

Offer your child a way to let off steam when he’s feeling frustrated. Have him run and play outside. Give him encouragement when he’s trying something new or doing something difficult and succeeding. Look for successes and praise them wherever they can be found. You are supporting his efforts to be independent. That is what the terrible twos is all about.

But back to my story. My neighbor’s child? The one who needed to sleep but whose mother kept picking him up from his bed? I felt pity for the boy. He needed a mother to say, “Shhh. You need to go to sleep now and that is that.”

That is what he needed to feel safe and secure enough to fall asleep and get some rest.

But you know what? He grew up into a nice enough young man. In spite of any and all parental mistakes.