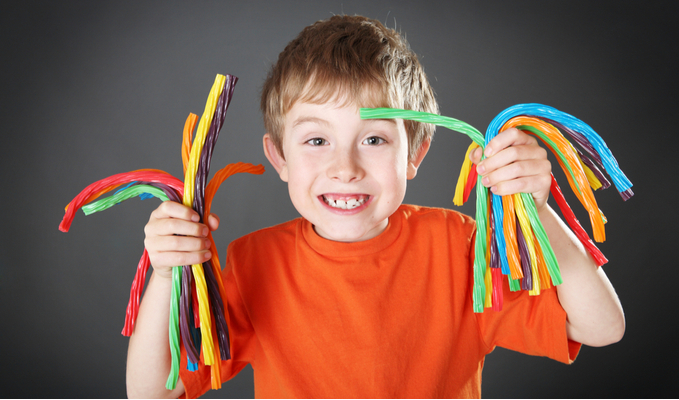 Sugar has long been thought to be bad for children. The sweet substance has been accused of causing tooth decay, diabetes, childhood obesity, and ADHD among other conditions, and in saying so, we’re just getting started. In spite of accusations equating sugar with the devil, some experts continued to insist that the number of calories was more important than the type of calories consumed. Now, a new study appears to burst that dream bubble wide open, declaring once and for all that sugar is really bad and harmful stuff, in and of itself. It, sugar, harms the metabolism.

Which begs the question: if you knew for a fact that sugar was outright harmful to your child’s health, would you give him the occasional candy or sugary treat, nonetheless?

While you’re pondering your answer, let’s take a look at this new study in which researchers took kids off sugar and fructose, substituting starchy foods instead, to see what would happen. In other words, the kids ate the same amount of calories they always did, but none of those calories came from sugar. Now these weren’t just any kids, but children who had metabolic syndrome. Metabolic syndrome is a group of conditions that tend to occur at the same time: high blood pressure, high blood sugar, high cholesterol, and fat around the middle (belly fat). Metabolic syndrome, as you might guess, increases the risk for several health issues like heart disease, stroke, and diabetes.

Kids didn’t used to get fatty liver disease and type 2 diabetes, but today, with childhood obesity on the rise, doctors are seeing children with these diseases, too. The study authors wanted to see if taking kids with metabolic syndrome off sugar might improve their overall health. What they found was that within 10 days of going off sugar, there was a dramatic improvement in the health of these children. And the kids didn’t even eat fewer calories or lose weight. The only thing they did was eat other calories instead of calories from sugar.

The study was a small one, but pretty darned impressive nonetheless. Researchers from the University of California at San Francisco and from Touro University Calfornia studied 43 children aged 9-18. All of the children were obese and had at least one other sign of a metabolic disorder, for instance high blood pressure, high triglyceride levels, or a marker for fatty liver.

The children were provided with nine days’ worth of food, including snacks and drinks, but without the usual sugar. Instead, the researchers gave the children enough starchy foods  to maintain the same levels of fat, protein, carbohydrates and calories that the children were used to consuming. The kids got foods like bagels, pasta, and plainer cereals instead of their usual high-sugar cereals, cookies and sugar-sweetened yogurt. The number of calories was the same, but sugar was cut from 28% to 10% while fructose (a form of fruit sugar) got cut from 12% to 4% of all calories consumed.

Now note that this didn’t mean the children felt deprived. They were purposely given food thought of as “kid food,” for instance potato chips, pizza, and hot dogs. Things their parents might buy for them at the local supermarket.

The researchers weren’t looking for weight loss with this sort of diet. In fact, if the kids began to lose weight, the researchers upped their food intake. That’s why the researchers gave the kids scales to weigh themselves each day, so they could add calories if the kids started losing weight. The whole purpose was to see what sugar, not calories, does to kids.

According to Jean-Marc Schwartz, PhD, of Touro’s College of Osteopathic Medicine and senior author of the study, some of the kids actually complained that this diet felt like too much food for them. “When we took the sugar out, the kids started responding to their satiety cues,” said Schwarz. “They told us it felt like so much more food, even though they were consuming the same number of calories as before, just with significantly less sugar. Some said we were overwhelming them with food.”

In other words, take out the sugar, and kids feel fuller, sooner. That means that children who don’t eat sugar will eat less and lose weight. But in this study, the children were made to eat the same number of calories, and pretty much prevented from losing weight. In addition to feeling fuller, sooner, was there an improvement in their health?

You bet your sweet bippy. After nine days of this virtually sugar-free diet, every measure of health appeared to improve, with no change in weight of course, since this was prevented by design. Blood pressure went down (diastolic blood pressure decreased 5mm), triglycerides went down (33 points!), LDL-cholesterol (the “bad” cholesterol) went down by 10 points, and liver function tests showed marked improvement. Fasting blood sugar test results were down by 5 points and the kicker? Insulin levels were cut by one third.

“Sugar Calories Are The Worst”

“All of the surrogate measures of metabolic health got better, just by substituting starch for sugar in their processed food—all without changing calories or weight or exercise,” said Robert Lustig MD, MSL, a pediatric endocrinologist at UCSF Benioff Children’s Hospital San Francisco and lead author of this study. “This study demonstrates that ‘a calorie is not a calorie.’ Where those calories come from determines where in the body they go. Sugar calories are the worst, because they turn to fat in the liver, driving insulin resistance, and driving risk for diabetes, heart, and liver disease. This has enormous implications for the food industry, chronic disease, and health care costs.”

Most parents choose to see sugar as something that can be eaten in moderation. For instance, it’s okay to have a piece of occasional candy, if the diet is otherwise healthy. Should the results of this study change this way of thinking?

Listening to Lustig, one might think so, “This study definitively shows that sugar is metabolically harmful not because of its calories or its effects on weight; rather sugar is metabolically harmful because it’s sugar. This internally controlled intervention study is a solid indication that sugar contributes to metabolic syndrome, and is the strongest evidence to date that the negative effects of sugar are not because of calories or obesity.”

Schwarz adds that, “I have never seen results as striking or significant in our human studies; after only nine days of fructose restriction, the results are dramatic and consistent from subject to subject. These findings support the idea that it is essential for parents to evaluate sugar intake and to be mindful of the health effects of what their children are consuming.”

Kids love sweet foods, even crave them. But if your child has a weight problem, cutting down the amount of sugar your child eats, would seem to be a no-brainer. The study was definitely a small one, and it would be nice to see a larger study. Even so, the results are pretty persuasive.

Do you let your child eat sugary foods in moderation? Did reading about this study change the way you think about sugar and your child’s diet? Please be sure to visit this website northraleighpediatrics.com/services/ of you still have further questions.