Spatial concepts are complex unconscious thinking skills that most children master at an early age. They acquire this knowledge with no apparent difficulty. But for some children, the understanding of the self and the relationship between objects within a given space is difficult. Such children have trouble with simple concepts like up, down, on, under, in, out, behind, and in front.

It’s natural for children to learn concepts in their own sweet time. So a difficulty in understanding spatial concepts isn’t uncommon. Some kids simply learn these ideas later than others.

Parents may first notice the problem when warning a child of approaching danger: “Adam, watch out! Jaden is about to bump into you with his tricycle from behind!” 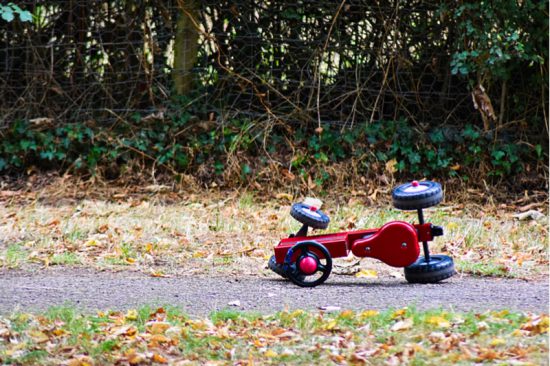 As a parent, you want Adam to have an instant understanding of where Jaden’s trike is in relation to his body and within the space occupied by the two boys. That is what Adam needs to understand in order to quickly get to safety. If Adam fails to understand “from behind” he won’t know how to position himself in order to avoid a collision with Jaden. He may look around (or up and down—or even just stand stock still) in dismay, as the realization comes that once again, he will get hurt for reasons he just doesn’t understand.

You can see a child is having spatial awareness difficulties when you direct that child to do something and are met with a blank stare and inaction. For example, you might say, “Emily, you left your hat on top of the clothes hamper again. Can you please put your hat on the hat stand where it belongs?”

Emily may understand the words “hamper” and “hat stand” but she doesn’t understand “on” or “top.”  These are key directional words that may have no meaning for a child having difficulties with spatial concepts.

Such difficulties sometimes suggest a broader issue that must be dealt with, such as, for instance, dyscalculia (a type of dyslexia with numbers and math instead of words and reading) or autism. That means the difficulty is not something to take lightly or ignore. Spatial awareness difficulties will not go away with time, though your child can certainly learn to adapt and cope.

Do the two scenarios with Adam and Emily remind you of your own child? If so, you’ll need to take a proactive approach to getting some help. But first, an explanation of spatial concepts is in order.

Understanding spatial concepts has to do with the development of a spatial awareness of the self in relation to the things that share space with you The self is at the center of this concept and is crucial to one’s general perception of well, everything. A person needs to understand his location in order to gain knowledge of such critical information as distance, position, and speed, for instance.

Spatial awareness is the culmination of a series of cognitive processes. We must process, interpret, and organize the multiple stimuli we receive from our environment and the items within that environment. Only through these steps can we create an understanding of the relationship of our bodies to the spaces we inhabit and the objects that surround us.

A good example of spatial awareness and how it is learned is demonstrated by the infant who is learning to reach out and grab a toy. A baby, using the hit-or-miss method, learns where his limbs are in space (called proprioception) and how far he must stretch the muscles in his arm to span the distance from the arm’s starting point (his body), to the toy (spatial awareness). Each successive attempt should add information to the baby’s brain about the amount of muscle stretch required and the distance of the toy.

The baby can then apply the knowledge he gathers over time to similar objects and situations until the information is fully a part of his unconscious thinking. The infant comes to know on sight whether an object is within his reach. This sight knowledge is gained through mastering concepts of distance and learning the boundaries of his own physical limitations: he learns what distances his arms can and cannot reach.

Part of our motivation as humans to be upright and walk is found in the desire to reach things that are too far away to touch. A child can see that people who walk can get closer to items the child wants but cannot reach. The child sees that as one walks over to an object, the position of the object is closer to the body.

The child also begins to understand that a faraway object looks smaller, while from close up, the object looks larger. A child, in short, gains with age and experience an understanding of the proximity of items and people in relation to his own physical self. He gains mastery over his own movement as he grows in the understanding of his own personal space. He controls his limbs with ever greater precision.

A child with poor spatial awareness will tend to have difficulties with visual perception. Such a child may be clumsy, often bumping into things. He may stand too far away from or too close to objects.

It may be difficult for a child with spatial awareness difficulties to master the act of writing. A writer must measure the distance between pencil and paper. He needs to know how much pressure to apply to the pencil to make legible marks. A writer has to know the difference between right and left. A child with spatial awareness difficulties may be confused by the teacher’s writing instructions (e.g., hold the front end of the pencil between the third and second finger of the right hand, while allowing the end of the pencil to rest in the crook between thumb and index finger). By the same token, the child with poor spatial awareness skills will have trouble in gym class and playing games that require equipment (balls, bats, goal box).

Spatial awareness can improve with therapy. The therapist may begin by having the child draw a picture of a person. The resulting picture will help the therapist understand how the child sees the human form in relation to the environment. A child’s handwriting also offers clues to the therapist regarding a child’s spatial awareness deficits. A child who starts a sentence in the middle of the page or attempts to write vertically instead of horizontally is telling us how he sees things in relation to his awareness of the space around him.

The therapist will also want to observe the child’s gross motor skills. Watching the child play a sport such as soccer, for instance, will show the therapist how the child judges the distance and speed of an oncoming ball and the distance between the child and the goal box into which the ball must be kicked. Children who appear clumsy at such games, place themselves where they shouldn’t be, and bump into the other players, offer all lots of valuable information to the watchful trained therapist.

Improving spatial awareness should be a conscious goal of all those involved with the child: parents, therapist, and teachers. Target games are excellent therapy for this purpose. Have the child throw beanbags into buckets, hoops, or over a homemade finish line made from chalk or tape. A homemade obstacle course can help a child learn to position his body in relation to the obstacles he confronts as he runs a course. Dance, or the act of moving the body to music, teaches children the efficient use of space, and how to control body movement according to specific speeds and rhythms. Shooting marbles can help to develop a child’s judgment in relation to spaces and distance.

In the home, parents can turn everyday activities into spatial awareness therapies:

Editor’s note: This post was originally published March 17, 2014, and has been completely revised and updated for accuracy and scope.