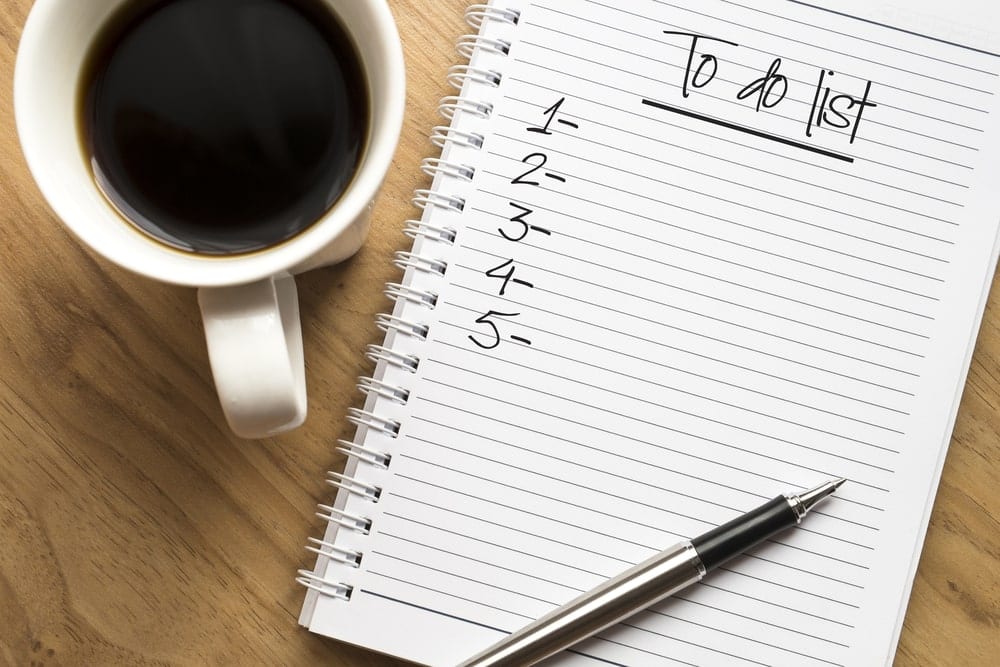 Lists are an organized person’s best friend. The act of setting down in writing what you need to buy at the store, or get done in your home, helps you cement these tasks in your mind. That means that even if you then forget to bring your list with you, you’re going to remember that you wrote “chocolate milk” on your list, when perusing the dairy aisle.

But lists aren’t just for moms. I found that out by accident. Or rather, my kids figured it out and had to explain it to me.

So lists. I’m big on them. Big on writing lists to manage tasks in my large family home. Even with many of my children grown and heading up households of their own, I still resort to making lists on a regular basis.

I make all kinds of lists. I make shopping lists and to-do lists, of course, but I have also been known to type out the menu for a holiday meal and stick it on the fridge. It helps me remember to serve all the courses I’ve slaved over preparing!

So back to the list revelation inspired by my children. There I was, doing my Passover-cleaning. The closest thing that describes cleaning for Passover in the orthodox Jewish home is “Spring-cleaning” but it’s so much more intense than that, and it’s all got to be done before the prescribed time. You need help from every able-bodied family member to make it work. So of course, I enlisted the help of my children. Even a very young child can help clean, given age-appropriate tasks (washing toys in the bathtub, for instance, is great fun and a big help).

But at a certain age, kids balk. It’s not that my kids weren’t willing to help. Jewish schools usually go into Spring break a bit early so teachers and students can do their part to make the holiday happen. But kids rightly deserve a bit of fun during their break. And just when they thought they were done with their tasks, I’d think up another age-appropriate chore to assign.

Finally, my kids had a brainstorm. “Write a list. Put everything you want us to do on a list and we’ll do it. All of it”

So I did it. I made lists for them. It took a little bit of time and forethought, but once their tasks were all laid out there in black and white, things went a lot smoother in my home.

There was no arguing. No exasperation when going from one task to the next. There was a list. It had a beginning and an end—it was finite. The kids had only to go from top to bottom to be done.

The kids themselves discussed which sibling would do which task, and they seemed to enjoy crossing items off the list. It went so well that we did it every day of Passover cleaning. It went even further than that: my kids actually requested me to write up a list for their weekly Friday chores, too.

Can We Talk Lists?

So now that we talked about lists can we talk lists?

The thing is, the lists I created for my kids were more like tutorials than lists. Rather than simply say “clean your room” the list might begin with, “Sweep cobwebs from ceiling,” go on with, “Dust all pictures,” and finish up with, “wash floor.”

In essence, I was reminding my children of the order in which a room is to be cleaned. Gravity is a thing, I would have said to them if they hadn’t tuned me out one hundred times before. Dust falls. Clean from top to bottom.

But they’d stopped listening with their hearing ears. The list, on the other hand, didn’t preach or judge. It was just words on a sheet of paper. Words to tick off with the satisfying swipe of a pencil.

Meantime, I had a hunch my kids were absorbing the how-to, the general gist of how to clean, just by reading the items and going through the motions, each week. Plus, they were learning a lesson in organization. They would grow up to be list-writers and list-followers, organized adults like their mom.

And that would take things to a whole ‘nother level.

Because making a list is quite different than following one.

If you want to understand this, think back to when you were a student. Remember taking notes in class? The reason you did that, instead of just listening to the teacher, is because writing notes makes something happen in your head. Your brain is analyzing what you’ve heard, choosing the important parts, and writing them down. You’re filtering ideas: separating in your mind what is necessary to remember and then cementing it into your Long-Term Memory (LTM) through the act of writing it down.

It’s very different than sitting and passively listening to a lecture. Later, you might return home and want to tell your family what you learned, but your brain only remembers the most random data. It’s so much easier to give over what you’ve heard in a lecture or a class when you’ve written notes.

The same is true of writing lists. As we write out a list, we are thinking out what it is we want to write and what order we’ll put them in when we set these thoughts down in writing. Later on, seeing the list and what we’ve written triggers a memory of what it is we’ve already decided to do.

In fact, as we write notes or a list, we are also using the visual brain as we visualize what we write. To our brain, it’s as if we’ve actually done those things we’ve listed, or at least reviewed them. When it comes time to carrying out those tasks, we do them better because we’ve already visualized them, seen them in our mind’s eye.

Obviously, if you write a list for your child, your child won’t get all those benefits. He won’t be using his brain to filter information for later retrieval. He isn’t using the spatial part of his brain to write the words.  But he is learning that lists, and list-making are important for setting about tasks in a calm and organized way. He is learning to be a list-maker and a note-taker. He knows it works to write things down and cross them out, point by point.

What you want to do at some point, is encourage your child to create his own to-do lists, based on the lists you’ve created for him. Maybe you’ll find the opportunity because you’re very busy and don’t have time to make a list for him at that moment. Maybe you can just say, “You know, I’ve written so many lists of tasks for you over the years, I bet you can write one on your own!”

Make it a goal. Praise his efforts. If he feels he’s done a good job, you may not even need to ask the next time around. In teaching your child the art of list-making, you are setting him up with a very important life skill—one he will always need and benefit from in the many years to come.

Oh, and speaking of lists, the Kars4Kids Kars4Kids Parenting blog just made the cut to be included in a 60 Best Parenting Websites list, over at Message in a Bottle. Did we say we like lists?