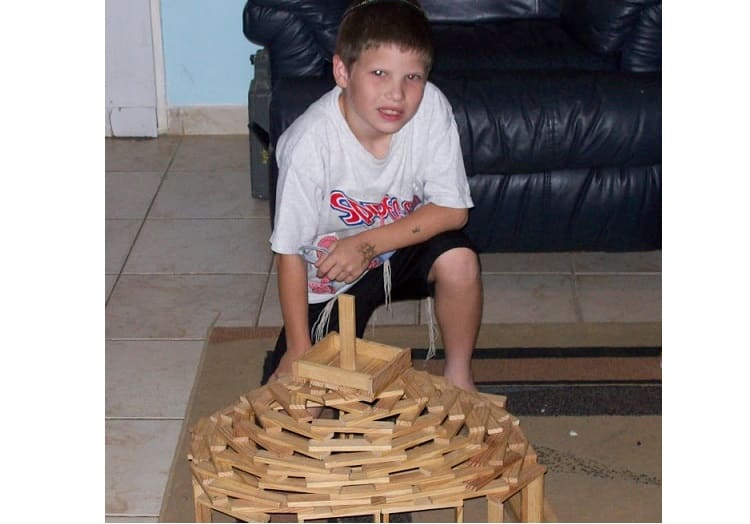 Kapla is without a doubt, the best toy I’ve ever purchased for my children (note that this is an unsolicited endorsement). I first saw Kapla when my youngest son, then two, joined a small playgroup in my neighborhood. I came to pick up Asher and the mother hosting the playgroup that day said to me, “Come see what the kids made with Kapla.”

Elana said, “Come in the living room and see. It’s the biggest room in the house, so we always do Kapla stuff there.”

I followed Elana into her living room and saw that the toddlers had built some sort of structure with wooden slats. It was impressive. Elana explained to me that no one in her home could resist playing with these wooden Kapla slats and that over the years she’d purchased a number of sets so her family could build bigger and better bridges, buildings, and towers.

Intrigued, I decided to research the toy on the web. I discovered that the creator of Kapla is Tom van der Bruggen, originally of Holland. After studying art history, he sold antiques and restored furniture. Then, at 25, van der Bruggen decided it was time to scout out a property in France where he could do something he’d always wanted to do: build a castle.

Tom found the ruins of an old farm along the Tarn River in the south of France. It was love at first sight. He knew he wanted fountains and towers and all sorts of interesting architectural details for his castle. But van der Bruggen wanted a way to be able to see how each detail looked beyond his sketches.

Tom began using wooden blocks to build a model of his castle, but found that not all wooden blocks were created equal. Some blocks worked better for making roofs, while others were better for designing a lintel. Tom wanted wood pieces that could be useful for building any and all structural details, so he invented them.

The pine planks that Tom devised are based on a ratio of 1:3:15. Each identical Kapla plank is 1 unit high, 3 units’ wide, and 15 units’ long. Because the cuboid planks are precision cut to this one size and shape, they can be used to create large, stable structures. Gravity is the “glue” that holds Kapla structures in place.

Tom dubbed his planks “Kapla” which is a combination of the Dutch words “Kabouter Plankjes” or “gnome planks.”

‘What a brilliant concept!’ I thought, as I read the story of Kapla online. The holiday season was right around the corner. I decided I’d buy a beginner set of the planks for my family. Not long after that, a toy store advertised a sale on Kapla. I rushed into town to procure a set before they were all snatched up.

I knew I was on the right track when the toy store owner said to me, “This is the wisest toy purchase you will ever make. Everyone in your home, from 7 to 70, will want to play with Kapla. It’s irresistible.”

And that’s exactly how it was. My younger children had a blast with Kapla, but so did my older children, who were way past the age of playing with toys. Kapla, as it turns out, it more than just a toy. It’s a draftsman’s tool and an artist’s medium.

The thing I like best about Kapla is that there are no rules and no right way to play with the planks. Kids (and adults) must dig deep into their own wells of creativity to come up with design ideas. There are endless ways to make use of Kapla.

The downsides of Kapla?

When they were small, my children played with Duplo blocks, then Lego. Kapla is better than either one of those. The planks don’t break; they don’t hurt when you step on them; and there are no special pieces for your children to covet.

I’d much rather my kids be playing with Kapla than playing games on the computer.