Children and chocolate: do they go together, or should we be keeping them well apart? You might be worried about all the sugar and caffeine in chocolate—that’s got to be bad for kids. But guess what? The research says that chocolate does all kinds of great things for kids. Chocolate can improve a child’s temperament, reduce plaque, and may even cure diarrhea!

Don’t get the wrong idea. It’s not that children and chocolate are a match made in heaven. But some of the research may change your mind about chocolate for children.

Children and Chocolate: No Hyperactivity

Sugar and caffeine. Chocolate has both. And some parents think the chocolatey combo adds up to hyper kids. But way back in 2006, Australian researchers found that chocolate has no effect on behavior—at least not in preschoolers.

Half the Australian kids got dried fruit, while the lucky rest of them were given chocolate. Dried fruit, of course, has LOTS of sugar, too. But probably no caffeine.

Anyway, after the kids got their respective sweet treats, stories were read to them. Some got story time right away, and others, half an hour later. The two groups behaved exactly the same. The kids who ate chocolate were not any more fidgety than those who ate dried fruit. So maybe we’ve been wrong all along about children and chocolate and the way they behave?

Chocolate Mouthwash for Plaque and Bacteria

Could chocolate be good for children’s teeth? We-ell, yes and no. Chocolate mouthwash can cut back on the plaque and bacteria that cause tooth decay. So says a 2008 study from India. But the kids hated the mouthwash. It was too bitter for them, because DUH. The mouthwash was sugarless.

The researchers suggested that a sugar substitute might make the mouth rinse “more acceptable.” (Ya think? Any parent could have told them THAT.)

This is a real head-scratcher, but in 2005, a children’s hospital found that cocoa beans may prevent diarrhea. Cocoa beans have lots of the chemicals called “flavonoids.” These flavonoids stop the body from making large amounts of diarrhea-causing fluids.

Chocolate as a natural supplement to ease symptoms of diarrhea? The California researchers think it may be possible. They suggest giving kids dark chocolate, which has more cocoa. It’s not a cure exactly, but chocolate may offer mild relief for the runs. You might want to start with just a square or two and see how it goes. (No pun intended).

Chocolate in Pregnancy and a Baby’s Sweet Nature 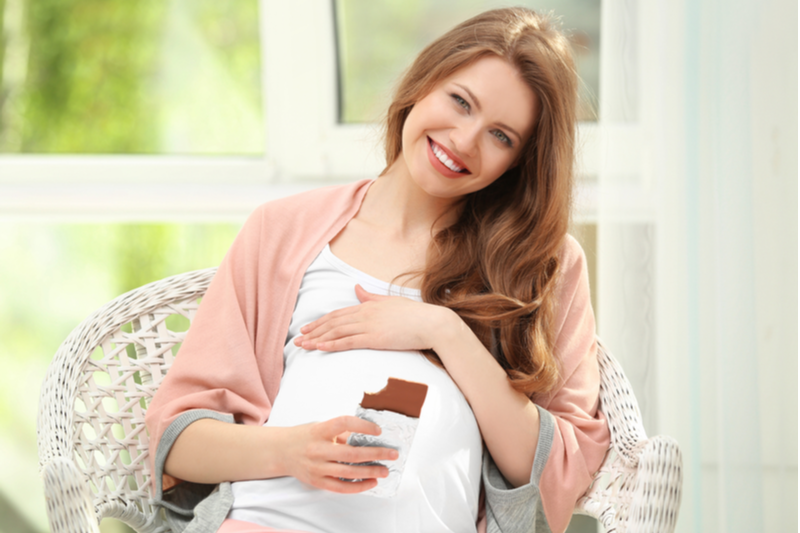 The “Sweet Baby” researchers started with the theory that chocolate is packed with components that work in the body to affect behavior and psychological well-being. Could these chocolate components cross over from mom to baby during pregnancy? It’s a firm maybe.

Children and Chocolate: The Downside

You knew it was coming, right? It can’t all be roses and well, chocolate. Because as it turns out, kids who eat candy and chocolate every day may be more likely to become violent as adults. How much more likely?

A 2009 study found that 69% of adults convicted of violent offenses ate sweets daily as 10-year-olds. If that statistic didn’t depress you enough, here’s another: only 42% of candy and chocolate-eating 10-year-olds remain nonviolent as adults. Researchers think that giving kids sweets and chocolate on a regular basis may keep them from learning how to wait for what they want. Not knowing how to handle delayed gratification may lead to the kind of impulsive behavior that in turn, may lead to delinquency.

*sigh* It sure is hard to think of depriving children of a bit of chocolate each day because they might turn into violent criminals three decades later.

On the other hand, this study lumps candy and chocolate together. And everyone knows that chocolate is a very specific kind of candy. So maybe it was the other candy causing all the trouble?

One can only hope.

Sometimes you read a study and wonder how they managed to get grant money to prove the obvious. That may be your reaction to a 2018 study on how emotions affect a child’s eating habits. The scientific conclusion? Children aged 4½ to 9 years old will choose chocolate candy over goldfish crackers more often whether they are sad or happy. (But you knew that.)

This too, will not surprise you: Sad children will eat more chocolate than happy children. But wait—how did the scientists make the kids happy or sad? With clips from The Lion King! (What else?) 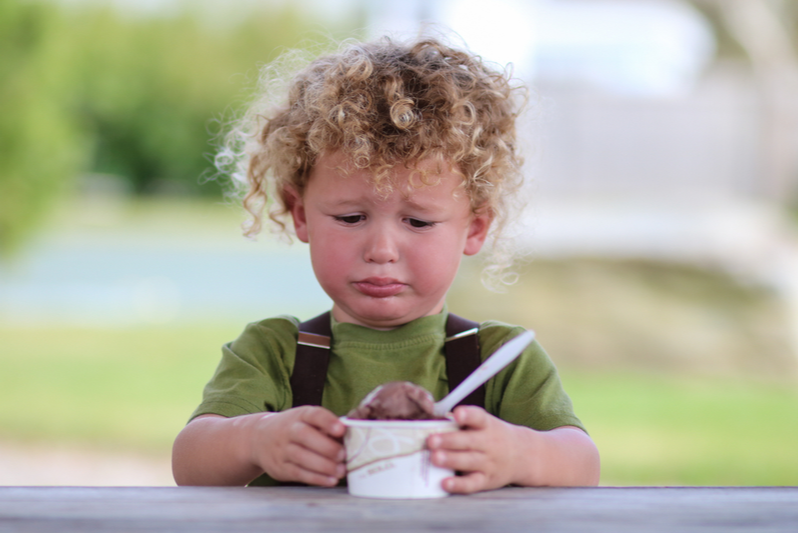 “The kids watching the saddest video ate the most chocolate,” said study co-author Shayla C. Holub. “There was a significant drop in consumption among the ones watching the happy video, but they still consumed more chocolate than the neutral video group. This suggests that children eat in response to both happy and sad emotions, but more for sadness.”

This study tells us that children may have found a useful way to cope with their emotions. It’s called “eating chocolate.” And if you’ve ever curled up on the sofa in front of the TV with a pint of fudge brownie ice cream, you will certainly be able to relate. Not to mention: all the times you’ve shared a chocolate bar with someone just because they make you happy. 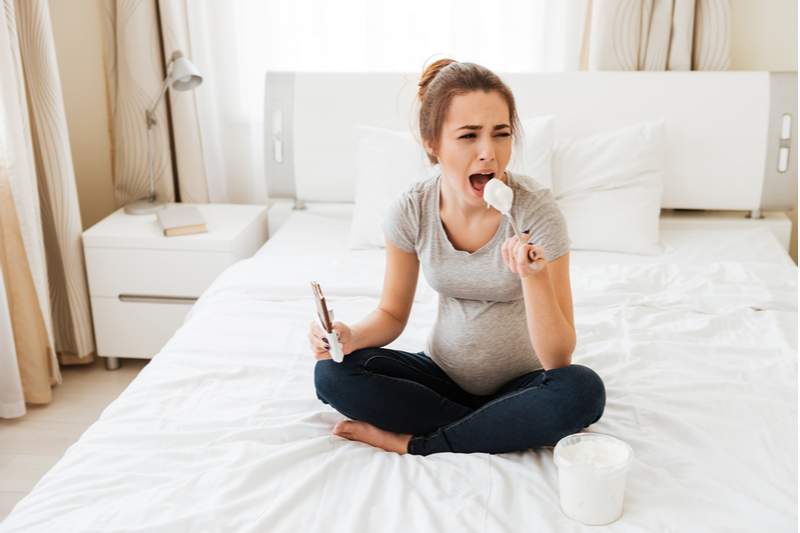 Last But Not Least: We Eat the Bunny Ears, First

This one’s not specific to children. But it IS fun. And very, very silly. A 2017 online survey found that when we eat chocolate bunnies, most of us begin with the ears.

The big surprise here is that the number of people who start in on a chocolate rabbit’s ears is fairly low. We’re talking only 59% of the 28,113 people who responded. Even crazier is discovering how many people simply have no starting point preference (33%). (They don’t even care. *sob*)

Last but not least, there’s the 4% who start with the tail or feet when chomping down on a chocolate bunny. Some of us would say that’s just wrong. So the next time you give your kid a chocolate bunny show that kid what to do. 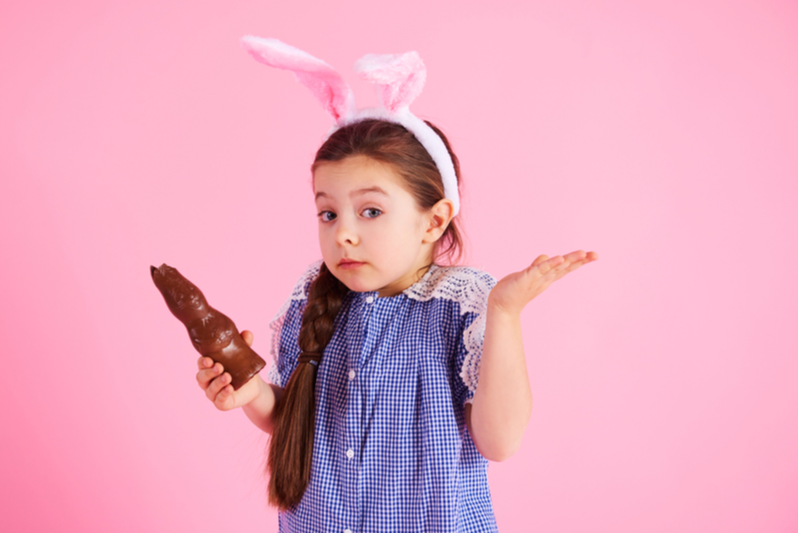 Children and Chocolate: The Bottom Line

That is, if you think it’s OKAY to give your kid chocolate. Because the bottom line is that the scientists can do all the studies they want, but it’s the parents who make the decisions. Sometimes a parent bases those decisions on stuff they read, at other times they go by their gut and instinct. The main thing is this: every parent knows what is right for their child.