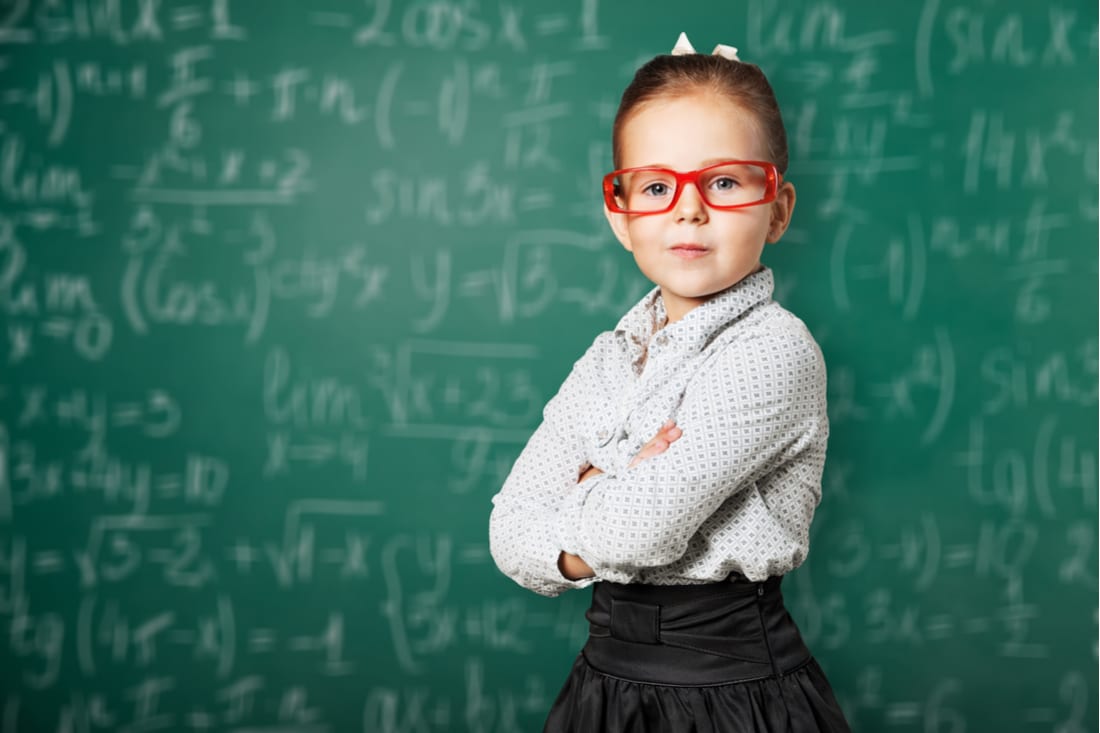 So okay, now that you know, what should you do?

Dr. Shannon W. Bellezza of Triangle Behavioral and Educational Solutions, suggests that parents find out how schools in their area test for giftedness. “Some schools do universal screening around 3rd grade to see which children may be gifted. Sometimes there are options for parents or teachers to nominate children for testing to qualify for acceleration in certain subjects. Parents should find out how their school screens for giftedness and follow through with the appropriate procedures.”

Can’t wait that long? You don’t have to, if you don’t mind paying out of pocket. “Many private psychologists offer IQ tests for children as young as 3-4 years-old, including the Stanford-Binet and the WPPSI tests,” says Alina Adams, a school consultant and author of Getting Into NYC Kindergarten.

Adams cautions that there are many variables to these tests, which means the results will vary, too. “An important thing to remember is that the tests are different, and it’s entirely possible for a child to test gifted on one, but not on another. Also very few IQ tests are reliable before the ages of 10-12, so it’s possible your child will test gifted one year, but not the next,” says Adams.

Before having children tested, parents should consider that “gifted” means different things to different people, says Parenting and Family Coach Dr. Richard Horowitz. “At times parents with reasonably bright kids latch on to the label ‘gifted’ without actually getting confirmation by a teacher or psychologist. There is no universally recognized standard for gifted. School districts will set criteria for admission into a gifted/talented program but again it is the school’s arbitrary standard rather than a definition based on research.”

Some parents don’t bother with confirmation. Tobi Kosanke, for example. She and her husband just assumed their 13-year-old daughter girl was gifted and ran with it: did what they could to foster their child’s development. “We nourished her intellect as a baby and toddler with toys, music, and books.”

“Gifted,” by the way, is not the same as “genius.” Alina Adams points out that unlike the lack of universal school standards for giftedness, there are actual accepted distinctions that separate those in the category “genius” from the merely “gifted.” “Giftedness can be anything from the top 90th percentile, to the top 95th or 97th. Genius is the 99.99 the percentile. The needs of the two groups are different.”

“Those with IQs between 125 to 145 can basically handle anything they decide to do. Those with IQs of 145 plus often have a harder time making themselves understood, which can get in the way of achievement. There is also the concept of multi-potentiality. When people are good at most anything they try, it becomes harder to narrow down exactly what they want to do. So they end up doing nothing, like the metaphor of Buridan’s ass,” says Adams.

Laurie Endicott Thomas, author of Not Trivial: How Studying the Traditional Liberal Arts Can Set You Free, has a different way of looking at IQ. She thinks that children on either end of the IQ spectrum should be thought of and treated as special needs children. “Keep in mind that a gifted child’s IQ is at least 30 points above the average. You would not dream of putting a child with an average IQ (100) in a classroom for mentally retarded children (IQ of 70). Yet gifted children are expected to thrive in a classroom that is geared to children whose IQ is 30 points below theirs. Not only will the gifted children be miserable from boredom, they will be wasting their time and developing bad study habits. (There’s no need to take notes if you know that the teacher is going to repeat the same boring thing 10 times!)”

Here Adams disagrees. “It really depends on the child. Some children who have tested gifted are so used to being the smartest kid in the room, the one that everyone fusses over and praises, that being put in a situation where everyone else is as smart—or even smarter—than they are, is a horrible experience. Some kids shut down completely, and become depressed. If their entire self-image is based on being the best, learning that there are others like them can be devastating.

“Another problem with gifted programs,” says Adams, “is that most public school-based ones operate on the assumption that all gifted children are gifted at the same things in the same way on the same schedule. The whole point of being gifted is that you are uniquely talented in a particular area. I’ve worked with families where their extremely verbal child struggled in advanced math, while other children with incredible math skills floundered in advanced English classes where their very literal-minded approach made parsing the nuances of texts nearly impossible.

Adams gives the personal example of her gifted son, who, when faced with Hemingway’s iconic six-word short story, For sale: baby shoes, never worn, insisted that there simply weren’t enough facts available to draw a definitive conclusion. “Sure, you could assume the baby died. But you could also assume it was an ad from a baby shoe factory that was closing down.”

Horowitz has a more general view of gifted programs versus mainstreaming gifted children. “The best advice for a parent is to make sure that their child’s individual educational needs are being met and the parents should arrange a conference with the teacher or teachers early in the school year to make sure this is occurring. If the teacher can meet the child’s needs in the regular classroom than there is no need for an additional program,” says Horowitz, adding this caveat: “If, however, the school has identified a child as eligible for a gifted program, I believe the parents should take advantage of the offering.”

Whether or not to mainstream your gifted child is likely to be determined, says Bellezza, by school policy and availability of resources. Bellezza details the various types of school instruction that might be available to a gifted student depending on the school. “Pull-out enrichment (when the child is removed from the classroom for specialized instruction), push-in enrichment (when the child remains in the regular classroom and is given specialized instruction via differentiation by the classroom teacher or from another teacher who comes to the classroom), or some combination are usually offered by schools.”

William Schlitz of Keller, Texas, and his wife, Dr. Myiesha Taylor, decided to bypass the school system altogether. “My wife and I have homeschooled our 3 children here in Texas. We did not make the decision for religious or conservative political reasons. The decision was made to specifically address the gifted status of our two oldest children and tailor their education to create an academic environment that allowed them to thrive. Part of that was our desire to create a secure environment where our kids felt safe, free from bias, and could focus on their education. Like many who start this process we were concerned if our decision would hurt our children’s future (college?). But in reality it served as a launching point for all of them to thrive.

Schlitz’s and Taylor’s eldest daughter, Haley Taylor Schlitz, is today a 15-year-old senior at Texas Woman’s University. “Haley made the jump to homeschool when we became concerned about her academic progress at a local middle school. It was Haley’s growing disinterest with her education that led us to have her formally tested for giftedness. Her tests demonstrated a very highly gifted person.”

Haley went on to become a Davidson Young Scholar, and a member of both MENSA and Intertel, graduating homeschool high school at age 13. The young woman has been on the Dean’s List of TWU for the past two years with a GPA of 3.7. Haley will have her BS degree in May 2019, when she will be 16 years-old, and plans on attending law school starting the following Fall semester. Another son is about to follow in Haley’s footsteps. Ian, at 12, has just passed the entrance exam at a local community college.

Having taken the journey of homeschooling her children, Myiesha Taylor has developed insight into gifted education processes around the United States, and has served as a resource for families traveling a similar path. To this end, Taylor created a Facebook group, Brilliant In Color, that helps families of color discuss how to navigate giftedness for their children.

Testing, confirmation of giftedness, and education aside, some parents wonder what being gifted will mean for their child’s emotional makeup. Will being gifted mark a child as different? Do gifted children have difficulty finding and making friends, and cultivating relationships? Will a gifted child, of necessity, always be lonely? How will being gifted affect the child’s world view?

“Gifted children are prone to problems with loneliness and depression. Often, the gifted children themselves are blamed for having ‘poor social skills.’ Yet the real problem is that children generally develop real friendships only with other children whose IQ is within 15 points of theirs.

Endicott Thomas describes the emotional downside of being gifted. “Because of their abilities to use abstract reasoning, gifted people are often keenly aware that the universe is indifferent to human suffering, that many social institutions are stupid and cruel, and that many adults are hypocrites. For this reason, gifted people need to find some way to make a positive difference in the world. Otherwise, they can suffer greatly from a problem called existential depression.”

Alina Adams disagrees, suggesting that the real problem with being gifted (and knowing it) is watching out for inflated egos. “Professionally, I can tell you that gifted kids love feeling different, and knowing things other kids don’t. Personally, I can tell you my husband and I tell our kids, ‘You’re not that great. Even if you’re one in a million, there are 6000 people out there just like you. And many more who are better.’

“Some parents like gifted schools and programs so that their children can be with like-minded peers. We like them because they prove to our kids just how not special they are,” says Adams.