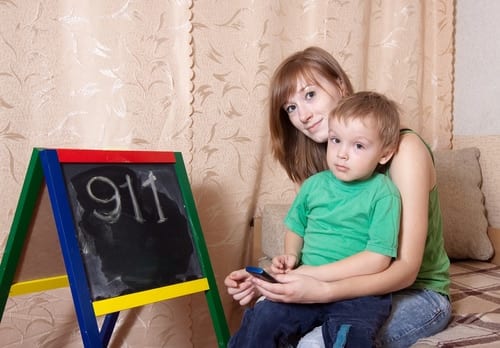 Teaching kids to dial 911 isn’t merely emergency preparedness. It could one day safe your life. Most importantly, kids must learn that dialing 911 should never be part of a game, a joke, or a prank.

There’s a crank call prank that was popular when my mother was a kid and it’s so infamous that Wikipedia has it as an entry. The caller calls a store and asks if they have “Prince Albert in a can.” When the unsuspecting clerk responds “yes” (because the tobacco was notoriously packaged in a can), the caller follows up with, “Well, you’d better let him out!” or “Then why don’t you let him out before he suffocates!?” In another version of the prank, the caller asks, “Do you have Prince Albert in the can?”

When the clerk says “yes,” the caller responds, “Well let him out before he drowns!” My mom once called the local corner store and tried that prank. Unfortunately, the store clerk knew it was her, knew my grandparents who owned the luncheonette/variety store down the street, and my mom was busted.

Crank calls are part of childhood too. Posing as a radio DJ, I used to call random numbers from the phone book and tell those who answered that they had won a black and white television set. All kids, especially young ones, have a fascination with the phone. It’s one of those grownup tools that kids want the privilege of using especially because little kids rarely receive phone calls, adults do and seemingly have all the fun. As kids grow up, they test out roles using the phone, try out scripts and bits of dialogue from what they hear on the television and at home. If your child begins to express an interest in the phone, it’s probably time to teach them how to call 911 before they call it in a prank call.

911 is a universal number to connect with emergency assistance. Established by Congress 1968, it replaced the need for individual telephone numbers for fire, police, medical, and rescue services and consolidated all emergency services into one number.

When I was a kid, 911 didn’t exist. If there was an emergency, we had three separate numbers posted for an fire, police, and medical. But I knew early on that those numbers weren’t to be called except in grave emergencies and thank goodness I never had to use them. Training a young child requires them to memorize important pieces of information such as their name, their address, and the problem. A young child who talks can be trained to dial 911 just as well as an adult. It’s a type of emergency preparedness that isn’t just smart. It could one day save your life.

What is an emergency?

The following are situations that your child should consider an emergency:

The following situations are not considered emergencies:

Do teach your child that using 911 for a nonemergency, especially for a crank call is illegal because it prevents real calls from getting to the dispatchers. If real emergencies can’t get through the phone lines, innocent people can get hurt or die.

So what should your child do and say in the emergency?

The following is a recorded conversation between a five year old girl whose father was suffering a heart attack and 911.

At What Age Should You Be Teaching Kids to Dial 911?

According to Tamara Walker, R.N., and child safety expert and instructor, children as young as age three can be taught to use 9-1-1 in response to an emergency.

The following video, though slightly dated, is a good educational companion to parental instruction.