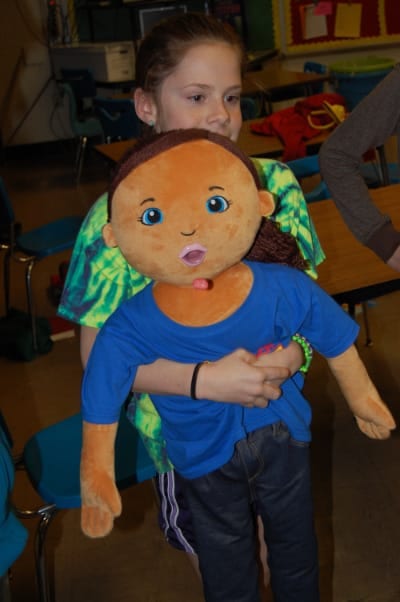 It’s not unusual to hear about a child who performs the Heimlich Maneuver on another classmate and saves a life. Nevertheless, the occurrence of it never ceases to amaze and astonish adults. How did that child know how to perform the Heimlich Maneuver? How did the child recognize the signs of choking and keep his cool?

Here are some examples of some quick-thinking Heimlich Heroes:

Teaching a child how to perform the Heimlich Maneuver isn’t just empowering for that child. It could save a life at some point. Yes, it’s hard to imagine a small child performing the Heimlich Maneuver. It’s hard enough to think that your child might be faced with a life and death situation. But knowledge breeds confidence and by empowering your child with some first aid and life saving skills accomplishes a couple things. It encourages grit and resolve in your child. It breeds confidence and leadership. It also tells your child that you trust them enough to aid in the case of an emergency, that you think they’re grown up enough to take on some grown up responsibilities. And kids don’t just love to be given adult responsibility. They reach deep down when a grownup believes in them and performing astonishing feats.

What is the Heimlich Maneuver?

The Heimlich Maneuver is a life-saving procedure developed by Dr. Henry Heimlich. The procedure is meant to clear the airway of a choking victim by harnessing the power behind air pressure that builds up behind the diaphragm and kinetic energy. By applying quick thrusts to the upper abdomen (just above the belly button), the force of air in the lungs pushed out with a thrust can dislodge and expel an obstruction or piece of food lodged in the airway. The advantage of using the Heimlich Maneuver over a slap on the back is that the air pressure pushes the obstruction up and out of the mouth instead of further down into the airway.

Kids are just as able to learn this procedure to save a life. In fact, kids who learn the Heimlich Maneuver feel more empowered because they feel less powerless when someone is choking and can make a difference.

What does a child learn as a Heimlich Hero?

Any child taught the Heimlich Maneuver will be taught to recognize the universal signals of choking. They will learn when it’s time to act, where to stand, where to place hands, and how to administer the procedure properly. They will practice the procedure over and over until it becomes an automatic response.

First, they will learn how to assess if someone is choking.

If an adult is choking, they should see any of the following behaviors:

In an infant or toddler is choking, a child who learns the Heimlich Maneuver should learn to recognize certain behaviors in infants not present in adults. Infants and young children don’t clutch their throats. They may cry or cough weakly and may begin to turn blue if they’re choking.

Second, they will learn how to get into position and perform abdominal thrusts (Heimlich Maneuver).

Note: The American Heart Association does not recommend the use of back blows. Although the American Red Cross recommends them, they can do greater harm, can lodge the obstruction deeper into the airway and can cause internal injuries.

How Does Heimlich Heroes Teach Kids About the Heimlich Maneuver?

The Heimlich Institute has developed 42-inch dolls equipped with an internal airway, lungs, and a diaphragm. Kids learn the Heimlich Maneuver by practicing real- life situations on the dolls.