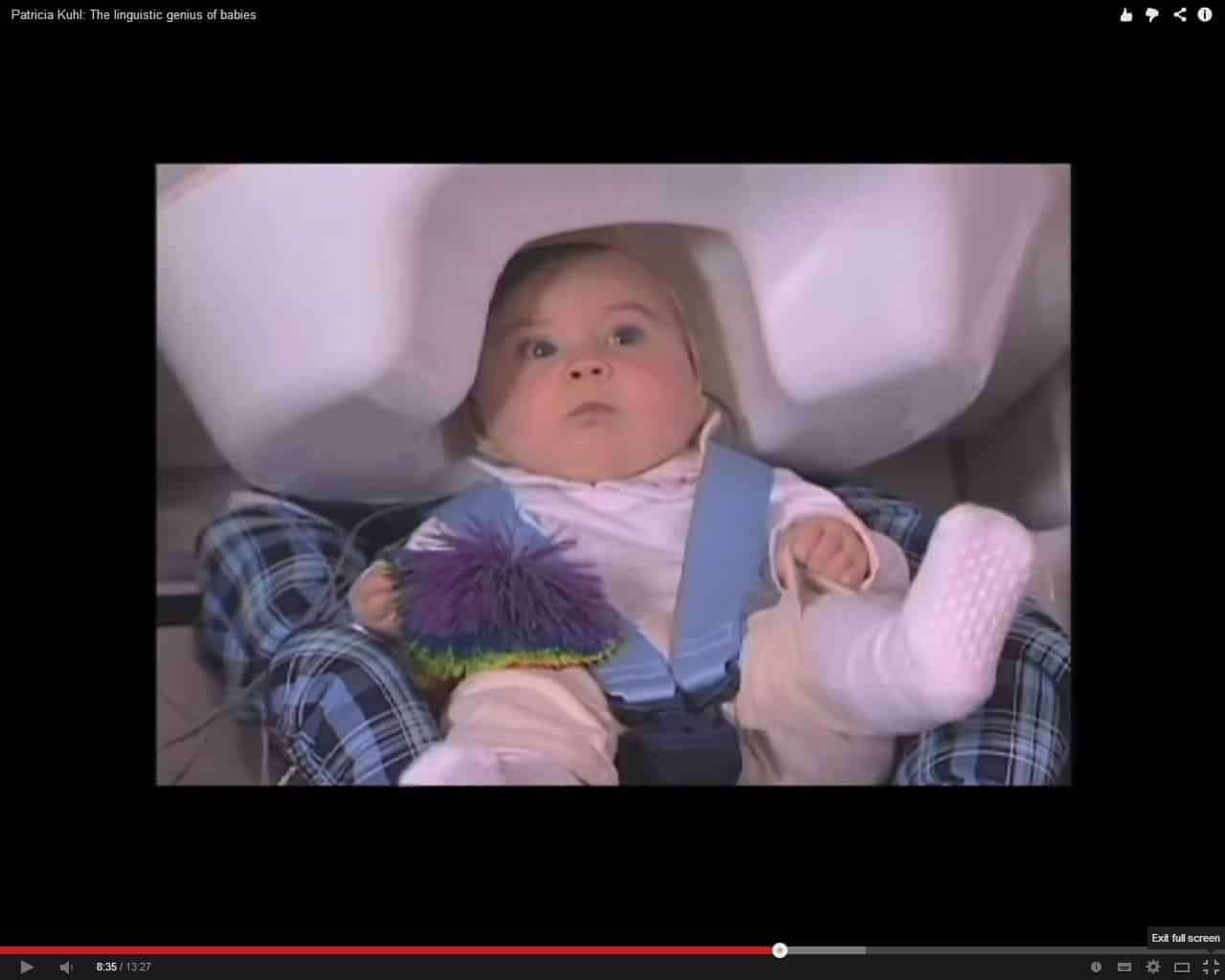 We’ve all heard of the stereotypically proud mom bragging about, “My son the doctor,” but it’s not too often you hear a mother say about her infant, “My son the brilliant statistician and linguist.” Dr. Patricia Kuhl thinks you totally could (and should).

Dr. Kuhl has been studying how babies learn language and making great headway in that regard at the University of Washington’s Institute for Learning and Brain Sciences, also known as I-Labs. Lucky for Dr. Kuhl, the lab in Seattle is equipped with a really nifty toy, a large noninvasive device that according to the good doctor looks something like a “hairdryer from Mars.” That “toy” is known as a magnetoencephalography brain-scanner, affectionately called “MEG” for short.

Various types of scanners have been called into play over the past decade and a half to show scientists what happens in the brain as people watch films, read, and listen to conversation. The problem was that such scans weren’t very effective in helping scientists understand what happens inside a baby’s brain, because these machines required subjects to lie perfectly still in narrow spaces at length. MEG is different because the baby has complete freedom of movement inside the scanner which has a built-in infant seat.

The baby wears a cap with an embedded GPS device. The scanner can pick up activity in the outermost layers of the baby’s brain. Bet that sounds dangerous to you. But it’s not—there’s no radiation. MEG relies on the use of magnetic fields and is deemed to be completely safe for babies.

So what is it exactly that Kuhl and her team of researchers hope to learn by scanning baby brains with expensive equipment? For Dr. Kuhl, it’s all about learning how babies learn language; just one small aspect of a new and fascinating field, the science of learning: a multidisciplinary course of study that combines developmental psychology, neuroscience, education, and technology. Kuhl has learned something new and kind of miraculous: babies serve as mini statisticians, gathering data on language as observe and listen to people speak.

There is one caveat: the baby can’t perform the magical feat without access to a live human being. Listening to a recording doesn’t work. Watching a film or a television show won’t produce the miracle. Only when a baby can be with people up close and personal, does he or she do this crazy genius stunt. That’s because babies are inherently social/emotional beings. Watching and listening isn’t enough. They need human interaction in order to learn. Without the personal touch, the baby is just not going to run the data through his or her internal computer.

The really crazy thing, however, is the fact that adults don’t have the same facility. In fact, babies lose this incredible facility for learning languages before they turn one year old. That’s why all mothers, everywhere, might truthfully speak of, “My Son the Brilliant Statistician and Linguist,” at least until the child’s first birthday party!

Kuhl thinks that based on what she has observed about the way babies learn languages, that what is called the “social brain” may be the gateway to learning. It is Kuhl’s hope that in gathering data on the social factors implicit in the process of language development we can find better educational methods and improve classroom environments to make them more conducive to learning. Most important right now is to find a way to bridge the gap in literacy between students from low-income families and their wealthier peers.

Meantime, researchers at I-LABS have all sorts of ideas in how MEG might be used to better understand the brain. They’d like to look at how babies are able to mimic facial expressions and sounds. They’d like to study children with autism.

The imaging center cost the U. of Washington $7 million dollars. That’s a lot of money to spend on equipment. But Dr. Kuhl and her team have already learned a great deal and what they have learned is so important that a value cannot be placed upon it: babies need socialization to learn. The human touch cannot be replaced by a sound or moving picture. The human touch is indispensable and incalculably precious.