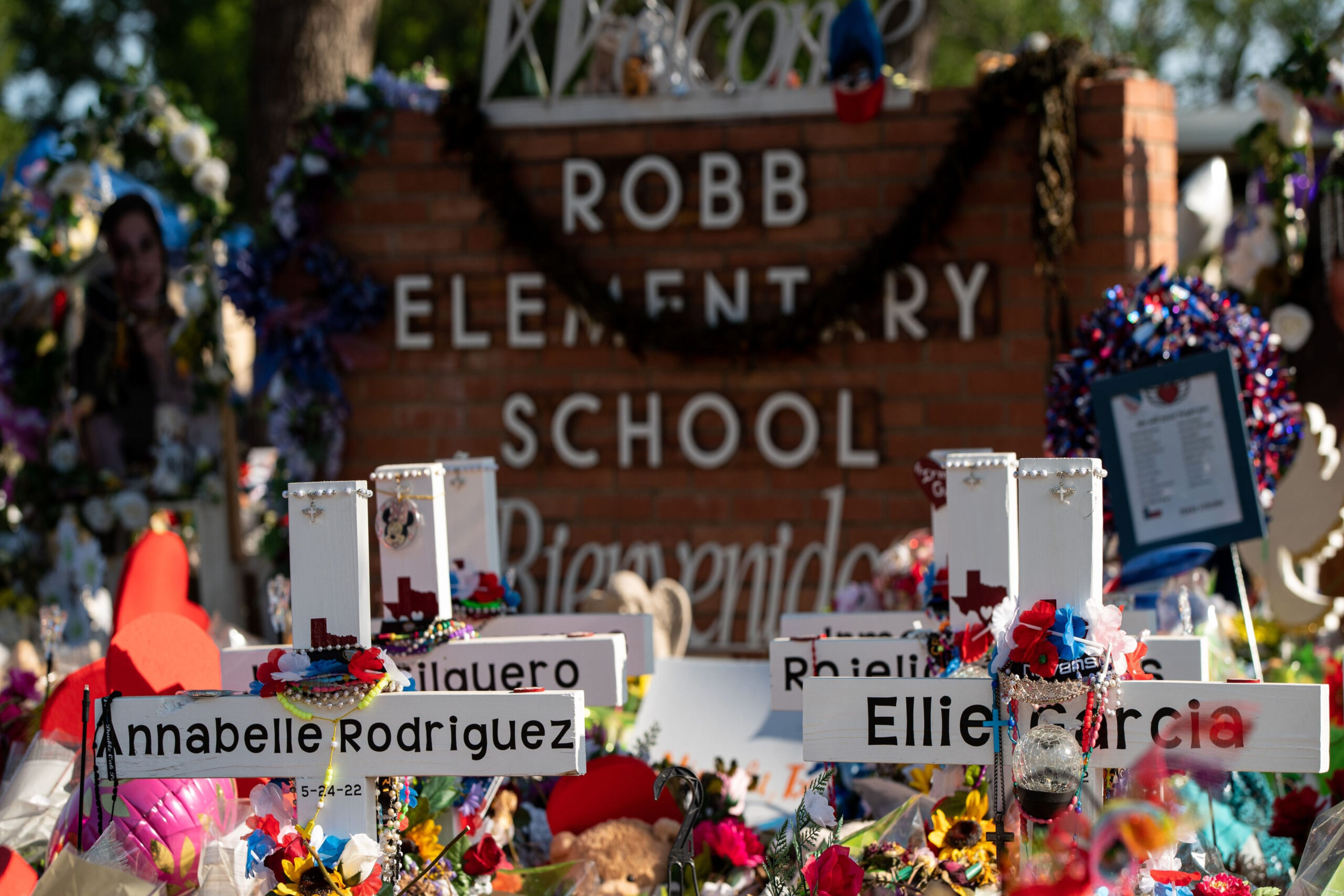 Uvalde, Highland Park, a supermarket in Buffalo, a mall in Indiana. The list of recent mass shootings seems endless. As a parent, you worry about your child’s safety. Not to mention, children will hear about these events and can experience anxiety or fear. Parents should be prepared to validate a child’s feelings, answer hard questions, and reassure them that such shootings almost never happen, despite what they hear on the news.

How do children experience news of shootings? Psychiatrist Dr. Carole Lieberman specializes in helping kids cope with “living in a time of terror.” The author of Lions and Tigers and Terrorists, Oh My! How to Protect Your Child in a Time of Terror says that a child’s fears are greater than an adult’s. A parent can validate a child’s feelings by helping them make a plan of action for scary situations.

“As horrifying as news about school shooters is for adults, it’s a lot more horrifying for kids,” says Lieberman, “They imagine themselves inside the classroom in Oxford, Michigan when Ethan Crumbley came in or in Uvalde, Texas when Salvador Ramos came in, and feel terrified and helpless. The same goes for the Buffalo supermarket and Highland Park parade shootings. It makes them not want to go to school, stores, parades, or anywhere except their beds.

“It’s important to help them cope with these feelings, so they don’t go on to develop agoraphobia, the fear of being away from home, especially anywhere there are groups of people – from a classroom to a street crowd. Talk to them about the recent shooting in the news, and ask them what they would have done. Then come up with a plan for what might have been the best way to avoid getting hurt. Most important is to get them to express their feelings about these shootings – in words or in drawings or in pointing to emojis that express what they’re feeling.”

“It’s especially scary for them to see that some police didn’t protect the children,” says Lieberman. “You can tell them that most police are still willing to risk their life to protect them, but some police feel disrespected by those who want to ‘defund the police’, so they think twice about putting themselves in danger. This can be an opportunity to teach them about how important it is to show police respect.

“There are many things to do to make your child resilient in general, so that when unexpected danger occurs, they can feel more prepared – from reading books about heroes, to taking them to your house of worship regularly so they feel protected spiritually, to making sure they always have a family photo and your address and telephone number on them in case they get separated in the chaos.”

“Children may react to these tragedies by feeling scared, sad, mad or bad. If these feelings persist and they start changing their behavior, such as by not wanting to leave the house or by acting out, then it’s time to take them for professional help,” says Lieberman.

Fran Walfish, a leading child, couple, and family psychotherapist says that in her clinic, it’s the parents who are most disturbed by the attacks. “Interestingly, I have not been hearing a significant increase in child anxiety related to the Uvalde and other violent attacks. I have, however, seen an increase in parent anxiety.”

“Over the past several weeks as we approach the end of summer,” says Dr. Walfish, “I have seen parent anxiety over sending children back to school. Many moms and dads are riddled with newfound fears after the Uvalde and Highland Park shootings and other random acts of violence. Although some of my child patients experienced sleep disruption, and changes in eating and social habits immediately following those events, the kids seem to be more resilient than their parents likely due to their omnipotent belief that they are untouchable and invincible (a common distorted belief among adolescents).

“Parents, however,” says Walfish, “have naturally been socked in the gut with a feeling of powerlessness during periods of time when their children are out of their care and away from them. Kids attend school for a large percentage of their day so mothers and fathers are going to have to exert strategies for managing their own accelerated levels of anxiety and fears. This is easier said than done.”

Lieberman, who has worked with parents and children who have been through terror situations of all kinds, feels that looks may be deceiving when it comes to just who is suffering more. “Parents may be more willing to express their anxieties and other feelings to mental health professionals, but this doesn’t mean that kids are less terrified. It just means that parents, teachers and therapists need to work harder to get kids to express their feelings. This can be done through their drawings, play therapy, pointing to emojis, and talking. If kids aren’t encouraged to express their feelings, they hold them in and this comes out later as more serious psychological problems.”

Rewrite the Thought Messages and Scripts

Okay, but what about the parent who experiences anxiety, which surely has an effect on the child? Walfish has good advice: Stop the flood of scary, self-generated messages. “Parents need to rewrite the thinking messages and scripts that may pop into their heads,” says Walfish. “For example, if a mom starts to worry about her child’s safety and think about the Uvalde shootings during school time, she can develop a calming way of reassuring herself by reminding herself that although it’s natural to have fears, most schools do not experience shootings on campus, and her children are likely just as safe at school as they would be grocery shopping with Mommy.”

While the parents in her practice seem to be the ones most affected by recent news, it doesn’t mean children are immune. Walfish offers the following tips for both parents and children, on how to cope with news of mass shootings: