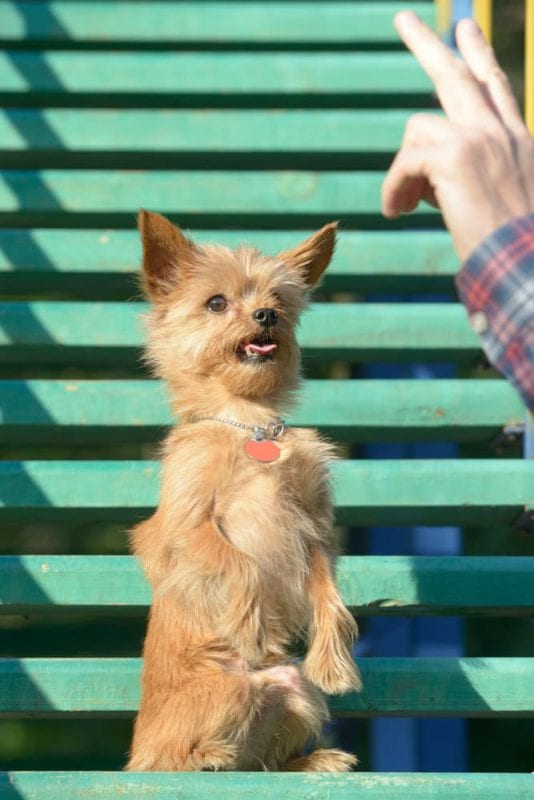 Do you remember the Youtube video that went viral about the three dogs that learned how to drive a Mini-Cooper? In case you don’t, I’ve included the clip to remind and entertain you.

In the video, three dogs rescued by the SPCA in New Zealand are trained by professional animal trainers to drive a mini-Cooper. Through months of painstaking training, the dogs are taught simple behaviors that when fit together will create a series of behaviors needed to drive a car. By the end of the training period, the dogs were able to climb into the driver’s seat, start the ignition, put the car into gear, accelerate, and navigate the car around a track.

It’s a masterpiece in operant conditioning and illustrates how a well-designed behavioral modification plan can reinforce desirable behaviors and eliminate less desirable ones.

Operant condition? Dog training? What does all of this have to do with parenting?

Parenting children, raising them to be fine, upstanding, stand-on-your-own-two-feet adults who make us proud requires training. As we mold our children’s behavior, we aren’t simply teaching them how to eat, maintain personal hygiene, how to become good students, or even the careers they pursue, we are molding their value systems. And all of this behavioral molding depends on operant conditioning, a system of operant and reinforcement first proposed by B.F. Skinner, a behaviorist and the Father of Operant Conditioning.

Who is B.F. Skinner? Think back, way back to your freshman year in college, Psychology 101. Remember the name? How about classical conditioning, the Skinner Box, lever-pressing rats, or pigeons that could read?

In 1948, B.F. Skinner conducted experiments with rats and pigeons to show that behavior could be changed or shaped through reinforcement. In one experiment, he placed a hungry rat in the skinner box, a box with a feed cup and a lever. Initially, the rat was rewarded with food if he approached the lever and touched the lever. Over time, the rat learned that touching and ultimately pressing the lever rewarded him with food. Desirable behavior was reinforced by food and the rat pressed the lever with increasing frequency. More interesting though, behaviors that offered no reward diminished.

Skinner also suggested that free will in humans really wasn’t random. It was also based on a series of reinforcements and that human beings tend to behave in ways that offer reward or that avoid punishment.

Here’s an example. You’ve joined a playgroup and for months, you’ve had positive feelings toward the other mothers, the social interactions you’re child is getting by playing with other toddlers, and the commaradarie you feel to those other mothers. Then one day, you make an innocent comment to a mother whose child has a cold. “Have you ever thought of using some of those natural treatments like Echinacea?” Instead of a balanced response, the mother screams at you and informs you that a) she doesn’t need another adult telling her how to raise her child, and b) there is no supporting evidence that those natural herbal treatments work one bit.

Your initial reaction is one of shock. Then, the effect of this negative interaction slowly begins to modify your behavior. You begin to feel negatively about the playgroup and look for other playgroups. You think about taking a mommy and me class offered at the same time. You avoid places where you feel you might cross paths with this mother.

Confused? Here’s another example, how you as a parent reinforce desirable behaviors.

You have a newborn and after a couple months of getting your baby on a feeding schedule, you and your child are still not sleeping. The problem? Your child doesn’t seem to know night from day. Throughout the bewitching hours (that cranky time from late afternoon and until night when babies tend to be cranky), your child is clearly tired, cries despite being fed, changed, or burped.

That was me in 1988. My now twenty four year old was a colicky, fussy infant and after too many sleepless night, my pediatrician recommended one of the most useful baby books of my parenting career. In 1985, Dr. Richard Ferber, a pediatrician and former director of the Center for Pediatric Sleep Disorders at Children’s Hospital in Boston, published his landmark book, Solve Your Child’s Sleep Problems.

The basic idea of the book is to train your child to soothe himself to sleep through operant conditioning. After a soothing, regular bedtime ritual (a bath, lullaby, or a last feeding), put your baby in bed awake, walk out, and close the door. Even if he cries, wait out short periods, five minutes or so, and then walk in. Rub your baby’s back, talk to him in a soothing tone, but don’t pick him up. Over a period of weeks, increase the “waiting” time to ten minutes, twelve minutes, fifteen minutes, etc. It’s painstaking and you might find it hard to watch the clock, but over time, you baby will learn that crying doesn’t reward him. You don’t pick him up at bed time, and he learns how to soothe himself to sleep.

While the Ferber Method, as it is called, has been the subject of criticism and has been deemed as cruel to a crying infant, it’s a perfect example of operant conditioning. If you consider Skinner’s theory when applying the Ferber Method, by not responding to your baby’s crying at bedtime, the crying, an undesirable behavior, diminishes over time and sleeping becomes the outcome.

Why is operant conditioning so important?

It can be used to manage behavior. Teachers use operant conditioning methods in the classroom to manage classroom behavior and to keep students on task. It’s also a method you can consciously employ at home to encourage more constructive behaviors. Recently, my youngest found out that not brushing his tooth caused multiple cavities and a crumbling tooth. Despite our pleadings and naggings, the negative reinforcement was powerful reinforcement and helped shape new behaviors. He now flosses and brushes twice a day; and when he gets his cavities filled, his desire to avoid the pain of fillings will reinforce the benefits of tooth brushing and good personal hygiene.

Reinforcements must change with time. Based on the behavior, you need to change the reinforcement. Giving a teenager a lollypop isn’t as powerful of a reinforcement as it is to a toddler. Getting the keys to dad’s car means nothing to a five year old.

Non-adaptive behaviors don’t last. Generally speaking, human beings have an innate drive to survive. Learned behaviors that interfere with that need to survive don’t last, except in the case of addictions.  In each of us, there is a strong drive to survive. If you child is engaging in life-threatening behaviors like alcohol use or drugs, you need to aggressively take action to break that learned association and to replace the kind of reward a child gains by taking drugs. If you have a child in this situation, you should seek professional help.

While it’s easy to think that human beings operate on a more enlightened level and that the choices we make are based on free will rather than conditioned responses, B.F. Skinner would probably disagree. Though current behavioral thinking has discounted some of Skinner’s conclusions, the core of his theory, operant conditioning has stood the test of time. Human beings and animals alike learn behaviors because of a operant conditioning. As parents, becoming aware of the power of and creative uses of operant conditioning can make parenting a more thoughtful journey.