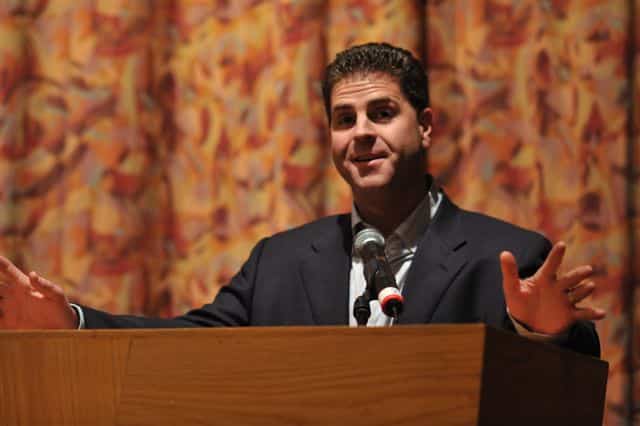 Tourette syndrome and bullying—it is no stretch to say that there is no other educator who knows as much about this subject than Brad Cohen. Cohen struggled to become a teacher in spite of having Tourette syndrome and he won! His story is so inspiring that it was suggested a movie be made about his life. That movie, Front of the Class, touched everyone who saw it, and is still touching hearts and minds, 7 years after its premiere.

The Kars4Kids blog wrote about the movie here, and included the movie clip. Even after watching the movie and blogging about it, we found we were still intrigued with the story and we wanted to know what Brad was up to these days. Thanks to Google, we discovered the Brad Cohen Tourette Foundation and made contact. What followed was an exchange that was profound for its powerful positivity, hope, and honesty.

We talked about Tourette syndrome and we talked about Brad’s personal experiences as someone with TS. Brad shared insider info about his family life, his life philosophy, and how to deal with bullying. It’s all right here, a Kars4Kids exclusive.

K4K: In the movie about your life, Front of the Class, we see the dramatic reenactment of that middle school assembly where your principal, Mr. Meyer, brought you onstage to tell the students about Tourette syndrome (TS) and how the kids applauded you. Later we see you telling your first classroom to ask you anything they want about TS.

We hear about your philosophy that education ends the bullying, that the bullies just want a way to understand the differences they perceive in others, that this is their aim. Is it really just that simple? Can all forms of bullying be prevented through education or understanding?

Brad Cohen: First of all, nothing is simple.  I try to share this idea with people often.  Just because it looks to others like it is simple, it is not.  I had to work hard to get where I am today.  I had to learn from my mistakes.  I had to go through a lot of trial and error.  I had to fall down and then get back up again.

But as I reflect…..doesn’t everyone go through similar experiences?  For me, they just look different than for the average person.

Bullying is a serious issue.  It’s happened for years.  But I do believe bullying is learned.  This means if it is learned, then it can also be fixed through education.  You must start small and build on experiences.

It needs to be discussed in schools and counseling sessions.  It should not be the elephant in the room.  When kids walk through scenarios, it helps them see there is light at the end of the tunnel.  It also helps kids see that the bully bystander is just as bad as the bully if you choose not to do anything about it.  Overall, I do believe education is the key because education is power!

K4K: After that school assembly, I imagine things still weren’t exactly magical for you. When did you realize you had an honest-to-goodness real friend?

Brad Cohen: Actually, it happened soon after the school assembly.  Students saw there was more to me than just a guy who made noises.  I joined a youth group and people just accepted me for who I was.  Tourette’s wasn’t an issue and I started to make genuine friends.  It was long overdue!

K4K: How can we arm our children against bullying?

Brad Cohen: We must talk about it and role play.  We must set up boundaries and monitor the situations.  We must build relationships so others see more to a child than just a disability or something superficial on the outside.  People need to get to know others for their special strengths on the inside.  Get to know the person, not the problem.

K4K: When a student is being bullied, what is the teacher’s role?

Brad Cohen: They must find a way to help.  It may mean help directly and protect the child. Or it may be to advocate for a child and teach them how to stand up for themselves.  Either way, no child should ever feel they are alone and the victim.  If a teacher can’t help, then who can?

K4K: In a case of bullying, we hear a lot about the victims. What about the bullies? Don’t they need help, too? How can we help them?

Brad Cohen: Of course the bullies need help too.  If the bully doesn’t realize what they did wrong.  Or the bully isn’t taught better strategies to use in life, and then they will continue to bully others.  We need to provide resources and be proactive with troubled children rather than waiting for a situation to arise and then figure out a way to fix it.

K4K: Tell us a bit about your personal struggle with TS. You talk about your “constant companion” but also about not letting Tourette’s “win.” Can you describe your relationship with Tourette syndrome as it was and how it has evolved?

Brad Cohen: At an early age, I realized I needed to make a choice. I could either go through denial or ignore the fact that I had Tourette Syndrome, or I could embrace my Tourette’s and make the best of it.  I chose to accept it.

I used to call Tourette’s my best friend.  It went everywhere with me, it knew me better than anyone else and like a best friend, we were going to have some good times and some bad.  Deep down, I just knew I couldn’t allow my Tourette’s to win!

K4K: In the movie, we learn how you got thrown off a golf course because of your tics and noises. Do you still get thrown out of restaurants and golf courses or has the situation improved on the ground? Is there a greater awareness of TS today?

Brad Cohen: There is definitely more awareness today than ever before.  Not only are people more aware of Tourette’s, people are more willing to talk about it.  It is no longer taboo to be different.  In some special way, it is cool.

But at the same time, it is never easy.  I have not been thrown out of as many places recently.  I believe this has a lot to do with the choices I make.  I put myself in successful situations.

For example, I made the choice to no longer go to movie theaters.  But if I did, I’m sure I’d be thrown out.  And when I do go out, I enjoy attending baseball and football games where it is already loud.  My tics blend in with the crowd.

K4K: Does your wife Nancy ever get sick of your noises and tics? In the movie, Nancy doesn’t even seem to be aware of your TS. Is she or was she like that in real life, say even on the first date? How do you account for her acceptance of TS?

Brad Cohen: Nancy has been great.  Tourette’s was never really an issue for us.  I think that is a credit to who she is as a person.  Even on the first date, it came up, but was never even a topic of discussion beyond that.  Even I was surprised at first.

K4K: Tourette syndrome is inherited. Does it concern you as a father that your son Dylan may one day develop symptoms of TS?

Brad Cohen: I used to say no, it didn’t bother me.  I figured who better to be a role model to a child with Tourette Syndrome than me!  But then, once you actually become a father, things change.  Nobody wants their child to be different.  I’m no different than other dads across the world.  But I do know that I can be that role model for my child in the event that we do need to navigate down a similar road.

K4K: How about in the classroom? Are there times when your TS symptoms disturb your students’ concentration, for instance, during tests?

Brad Cohen: Honestly, I don’t think so.  They are so used to me, it is not an issue.  If anything, I think it would be awkward for them to sit in a quiet room with me.

K4K: Dumb question time: how can you drive if you have tics? Isn’t that kind of dangerous?

Brad Cohen: Well let’s just put it this way, I’m glad I’m not the driver in front of me.  I’m just kidding.  I actually don’t tic much when I drive.  For a person with Tourette’s, we actually tic less when we are focused on something.  When I’m driving, I’m pretty focused, so my tics don’t happen as much.

K4K: Your story inspires us because you don’t allow challenges to hold you back from the thing you most want to do in life. We also see that you’ve really got the stuff to teach. You’re animated and enthusiastic and that is a key element to being a fine educator, in my opinion. Have you ever seen a child with ridiculous aspirations that were never ever going to come true? Are there limits to what a body can achieve, even with high motivation?

Brad Cohen: In my opinion, the sky is the limit.  I love people who think big and have dreams beyond the normal realm of life.  Who am I to tell someone else they can’t do something?

A true teacher never gets in the way of a good dream.  A true teacher embraces the moment and finds ways to support others.  It isn’t up to me to kill the dream; rather it is up to me to provide opportunities for that other person to see if they can fulfill the dream.  Allow them to go through trial and error and learn through their own experiences.

I’d like to guide a child towards success or failure and figure out the next steps with them rather than telling them the way it is “supposed” to be done.  Many people told me I couldn’t do a lot of things.  But each time I was told I couldn’t be a teacher because I had Tourette Syndrome, I just wanted to prove them all wrong.

I wanted to show them that not only could I be a teacher, but I could do it better than the next person. ***

Kars4Kids and the Brad Cohen Tourette Foundation have something exciting in the offing. Stay tuned to this space for details!