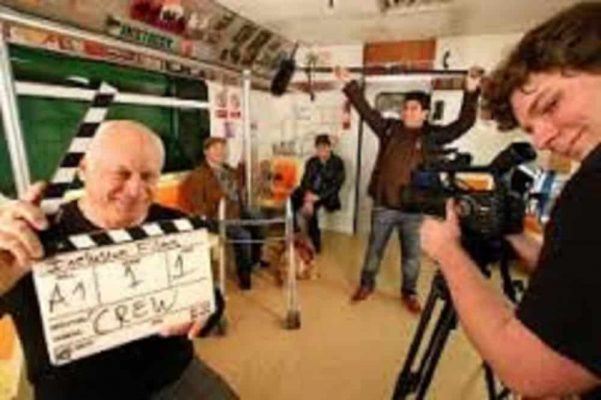 Seth Shulman, a 29-year-old, self-taught film editor, cinematographer, documentary film maker, and writer is also staff editor and post production supervisor at Futures Explored Practical Film & Media Workshop in Sacramento, CA, one of four film production workshops Joey Travolta consults with. The goal of the workshops is to expose adults with developmental disabilities to film production. The ultimate goal is to train and prepare them for jobs in the the film industry.

During the summer, Seth works as a film and production assistant at Joey Travolta’s short-films camp. Like Inclusion Films, the camp exposes grade-school children to the film production process. But the campers walk away with more than an understanding of the process. During those two weeks of camp, they develop self-esteem, confidence, and life skills.

At the Tenafly, NJ camp, where I’m collecting research, Seth moves like a hummingbird probing for cinematic perfection with his camera. Thin, wiry, and small in stature, he’s self contained and to himself. Ask him for an interview the way I did while visiting on-site one day, and he comes alive. He is like a talk-show host–charismatic and in command. His perceptiveness, artistic acuity, philosophy on life, and wildly funny sense of humor washes over you like a tidal wave.

First impressions can be deceptive.

Here are some aspects I found most interesting about him.

According to Joey Travolta, a film director, actor (yes, he is John Travolta’s older brother), special needs teacher, and founder of Inclusion Films, kids with autism spectrum disorder have great potential. But, they need to be embraced and to feel accepted. They need to be shown. Film production requires the same skills as life and is an ideal medium for teaching developmentally disabled kids necessary life skills. It requires collaboration, role playing, flexibility, communication, process flow, creativity, and problem solving.

While in Tenafly, NJ in August 2014, Seth decided to test those skills. Despite Joey’s reservations, Seth thought it would be a great opportunity for Austin, Elliot, Jeff, Nicco, and William, new summer interns working at the Marble Jam Kids in New Jersey (Inclusion Films collaborates with them and other therapeutic centers around the country) to put those skills to work. He challenged them to organize their own day trip to Manhattan and he would chaperone. The deal was this. They had to do the research, decide where they wanted to go, collaborate with each other, plan the itinerary, learn the bus and subway routes from Tenafly to Manhattan, and work within a budget (each intern was paid a per diem amount for food and minor expense). Though Seth considers himself an experienced urban traveler, on the day of the trip, he didn’t lead. He followed.

Even for a seasoned traveler, New York City is a challenging maze of subway and bus systems, boroughs, intricate neighborhoods, chaos, noise, filth, and congestion. For someone diagnosed with autism spectrum disorder, like the five interns, the difficulties are compounded. But, Seth had faith in them. All five been involved with some type of film production, either through Joey’s camps or through workshops he consulted with. All had learned valuable life skills. Would they be able to translate those skills?

Armed with subway maps and smart phones, they embarked on one of the greatest adventures without family and friend to guide and support. Elliot was the most anxious. So many of the new experiences required flexibility. There were so many unknowns. In addition to being in a supervisory role as an intern, no longer a camper, he had to work with new kids in a new location. In fact, other than a brief commuter plane ride, Elliot had never been on a real plane trip. The ride from LAX to New York is approximately five hours. Elliot was struggling.

Before attending one of the film production camps, Elliot could barely make eye contact or hold a conversation. At age 20, he had yet to graduate high school and though he had the intelligence, he simply couldn’t function in a high school environment. He had become a recluse of sorts, had gained weight, and rarely left his room. According to Seth, Elliot lacked confidence in his own abilities and had low self-esteem.

The New York trip, though exhausting and anxiety-producing, would be a game changer for all of them, especially for Elliot.

Seth had prepared them beforehand. On an earlier trip, two days before the start of camp, he took them into the city to visit B&H Video, a superstore on 9th Avenue, down the street from the Empire State Building. It’s a massive superstore that attracts photography, film, and lighting professionals, hobby enthusiasts, and just plain tourists. Though the interns had worked with lighting and editing equipment as campers, Seth was sure they didn’t realize that the equipment came from a store.  Like a student who seems shocked to learn that their teacher doesn’t live in a school, the interns really had no concept where their equipment came from. “What was their favorite equipment at the store?” According to Seth, they loved the “3-D printers and ARRI lights that change colors based on environmental lighting needs.” Currently, when filming in an environment, interns use a gel sheet in front lights to achieve the right colors. The ARRI light kits at B&H changed the lighting automatically. The guys were in awe.

He showed them how to buy tickets for the bus and subway from the vending machines; and how to walk through the turnstiles. The rest, he left up to them.

On the day of the trip, the ones who had paid attention during the first trip show the others what to do. Once in the city, they caught the right train headed in the wrong direction. Seth accepts fault for that one. Nicco nearly missed one train until Austin blocked the doors and pulled him into the train.

First stop was the Nintendo Store at Rockefeller Center. Then they went to Central Park and the Central Park Zoo because Elliot’s dad, who had lived as a musician in the East Village in the 1970s told  him how the zoo used to be free. When Elliot realized the admission was $12/person, he made a point never to listen to a man who hadn’t been to the zoo since the 1970s.

The Freedom Tower was Jeff’s choice. He ended up calling his grandparents in Michigan to help him with the directions, but then he navigatged the group by himself. By the time, they arrived at the Freedom Tower, Austin’s legs hurt and he was getting frustrated. For awhile, he thought about heading back to the hotel on his own, but worked through the frustration and stayed on. At the 9/11 Memorial, Seth remarked how all were emotionally moved. William took off his hat as a sign of respect.

From the memorial, they went to the Empire State Building. On the Observation Deck, they marveled at the vastness of everything and how much larger Central Park was than they originally thought. Elliott talked about the myth how dropping a penny from the top of the building could kill someone below. (Sorry, Elliot. Mythbusters debunked that one.)

For dinner, they went to an Italian place near Times Square. Jeff wanted a food chain and negotiated with the group. After finding a Subway a couple blocks away, he walked by himself through crowds of people and met up with the others after dinner. The final stop, Times Square at night was Austin’s choice. Though he’d had a hard time managing his frustration, it was all worth it to see the lights.

Though the day was exhausting, it changed the dynamics of the group; and for Elliot it changed his perspective. Though he had been anxious and fearful, supported by the group, he pushed through it and it really helped his confidence. It also made the interns closer as a group. They had faced a challenge together.

Joey Travolta noticed it too. By the end of the New Jersey film camp, he had decided he’d help Elliot find a job with one of the production companies, but on one condition. Elliot would have to satisfy high school requirements and obtain a certificate of completion.

Last Monday, Elliot started his new job. On his Facebook page, he posted the following note:

“I would like to formally announce that as of Monday, I will be working at Futures Explored Livermore Film Workshop full-time as an assistant editor and classroom aide. Not a year and a half ago, I worried if I would ever be employed, if I would just be a fat nerd who lived in his parents’ house for the rest of his life, unable to hold responsibilities or relationships. But now I’m part of an amazing team and I’m doing what I love. But to be honest, it won’t be long until the rest of the students find permanent employment in the film industry or otherwise. They are all talented, if not more talented than I.”

A documentary highlighting the 2014 Marble Jam Kids Film Camp and more about Elliot and the other interns will premier on Sunday, November 9 at the Tenafly Bow-Tie Theatre in Tenafly, NJ.