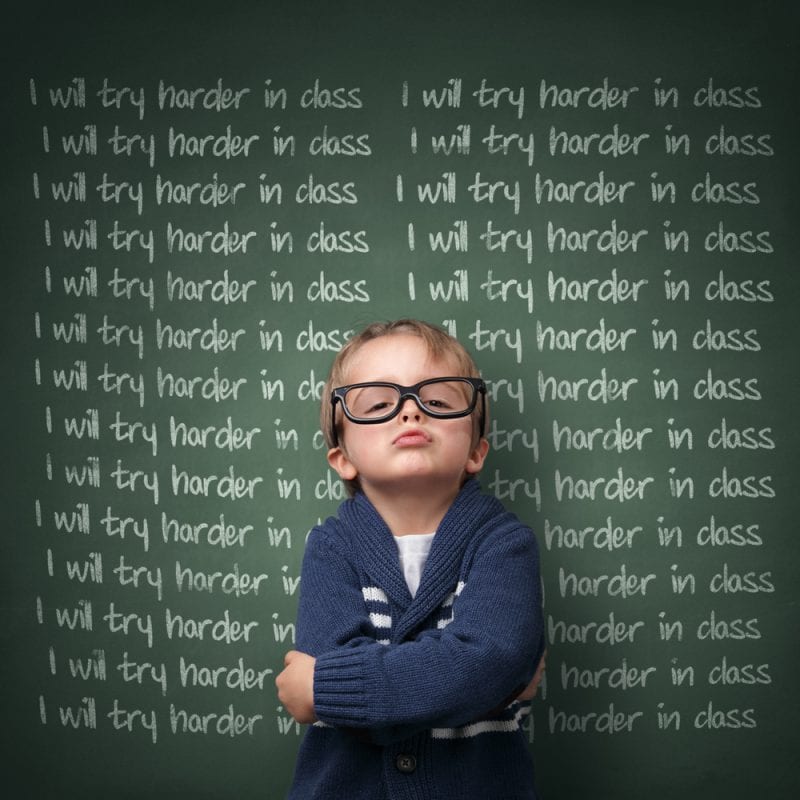 Antagonistic teachers, or teachers who seem hostile much of the time, are a fact of life. We reassure school children suffering the misery of an unpleasant teacher who belittles them. We tell them that not every teacher they have will be amazing, that muddling through the year is just something they have to do. But a new study suggests that having antagonistic teachers not only lowers students’ grades, but affects their ability to learn in future.

Which suggests that the tack we’ve taken all along, as parents, has been wrong. Why would we tell our kids to put up and shut up with unpleasant teachers knowing this will not only affect their grade point average but sour them on learning, going forward? The simple answer is: we wouldn’t. We’d try like heck to get our children transferred to a different class, in order to avoid that awful, no good teacher.

The study, by researchers from West Virginia University, Morgantown, and California State University, Long Beach, and funded by the Taylor & Francis Group, defines the antagonistic teacher as one who belittles students, shows favoritism, or criticizes a student’s efforts. And while the participants of this randomized trial were college students, it seems likely the results could be even more profound among, for instance, adolescents whose brains are still maturing and whose behavior is more volatile as a result.

In this particular study, experts in communication set up a teaching experiment in which around 500 college undergrads watched one of two versions of a videotaped lecture. Half the students watched a version of the lecture in which the teacher antagonized students. The other half watched a standard lesson, without antagonism. The students then answered questions on how they felt about the lesson, and went on to take a multiple-choice quiz on the lesson content.

Lesson With Or Without Antagonistic Teacher

In order to make the student subjects feel like they were in a real classroom, the authors filmed the lecture to show four undergrad students, two guys in the front row, two young women in the second row. The study participants viewed the lectures as if they were students sitting in the third row, behind the students shown in the first two rows in the video. What happened next was very simple, very clear cut: the students who watched the video of the lesson served with a side order of antagonism, performed worse on the test than the students who watched the standard lesson, without an antagonistic teacher.

Just what kind of antagonism did the students face? Some examples:

Antagonistic teacher: “You should already know the answer to that question if you were paying attention to last class.”

Normal teacher: “We went over that last class, so it should be in your notes, but I can go over that with you later if you’d like.”

Antagonistic teacher: “Yup. Well, it looks like some people can keep up and pay attention.” [Looks at student # 1.] “Brian, you could try and be more like Brenda here.” [Brenda is student #3].

Normal teacher: “Yup. Thanks for keeping up and paying attention.”

And still, the results were significant. Even stunning.

The students who watched the class with the antagonistic teacher scored as much as 5 percent lower than those who watched the standard lesson. The implication seems obvious: students don’t do as well when they don’t enjoy their lessons.

And it would be a rare student indeed who would enjoy being belittled, criticized, or shunted aside in favor of other students. That kind of teacher behavior is arguably abuse. At a certain point, you’d tune out the lesson in order to tune out the abuse. You’d miss stuff.

The thing is, this wasn’t just about a student’s score on a single test after one lesson that showed the effects of the antagonistic teacher. The effects were much longer-lasting than that. The students made less of an effort with their learning: after all, if you can’t please the teacher, what’s the point of working hard and doing well? The students with the hostile teacher, moreover, said they would never take part in a future course taught by that teacher, going forward.

Can you blame them?

Study author Dr. Alan Goodboy feels that the long-term consequences of having an antagonistic teacher are the real takeaway from this study. “Even slight antagonism, coupled with otherwise effective teaching, can demotivate students from being engaged and hinder their learning opportunities. So even one bad day of teaching can ruin a student’s perception of the teacher and create an unnecessary roadblock to learning for the rest of the term.”

In Dr. Goodboy’s opinion, teachers must therefore take particular care not to allow themselves to engage in this sort of negative and hostile behavior in the classroom. “Antagonism can come into classrooms unexpectedly and suddenly, even without the knowledge of the teachers themselves,” said Goodboy.

Antagonistic Teachers: Unaware of Their Own Behavior

Asked how an antagonistic teacher could be unaware of his own unpleasant behavior, Goodboy said, “We know that many instructors are unaware when they are misbehaving by antagonizing their students. We know this because they self-report at very low levels of misbehavior (or they don’t want to admit that they do it).”

Goodboy admits there is another kind of teacher who is very much aware of his or her own ill behavior in the classroom. For them it’s a choice. “There are plenty of instructors who are quite aware of their misbehavior and choose to belittle and put down their students in class. These instructors make the volitional decision to antagonize their students,” says Goodboy.

The results of this study, however, are without regard to the teacher’s intention. It’s all about the students’ perspective in relation to nasty teacher behavior, whether purposeful or otherwise. In general, explains Goodboy, the antagonism occurs at “very low levels, but when it does occur, it negatively impacts a learning environment as students do not enjoy learning the content and subsequently score worse on a quiz of that material.”

Dr. Goodboy believes that most teachers don’t engage in this sort of behavior, don’t antagonize their students. But where they do, learning is compromised. The researcher offers a suggestion that teachers be trained in self-awareness: to know when they are beginning to act in an antagonistic manner in the classroom. It’s critical for teachers to recognize and put a stop to this negative behavior that we now know can both damage a student’s grades and his or her attitude to learning in future.

Staying Positive No Matter What

Goodboy also suggests that teachers work at developing positive methods of interacting with students, maintaining an even behavioral keel, even when disagreements arise between student and teacher.

Will the researchers continue to pursue this topic further? Absolutely. The subject is too important to stop here. “These studies focus on instructor misbehaviors in a college context. We do not know that teacher misbehaviors in middle school or high school are similar to those with college aged adults. We believe that college instructors engage in hostility more than K-12 teachers, but without the data this is just speculation,” says Goodboy.