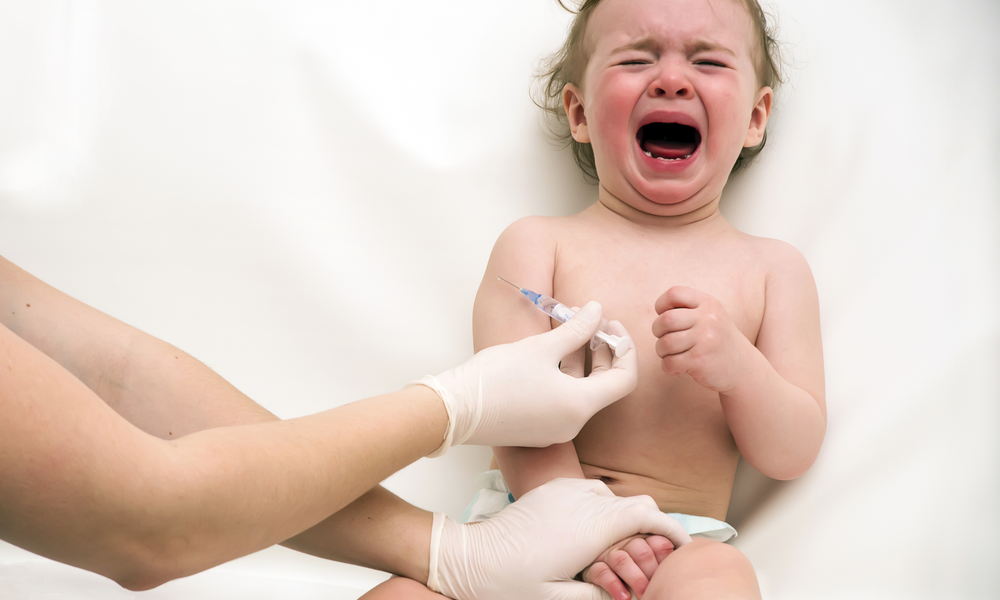 Calming kids after a shot seems to have little effect. They cry no matter what we say. A recent study agrees, telling us that comforting words, right after a shot, are not very effective. The researchers found instead that preschool children aged four to five years, are best soothed in the second minute after a shot. Until that time, cuddling or hugging works better than words.

The York University study, published in PAIN, looked at preschool children and what their parents said to them—and when—to reduce distress during vaccinations. The study is part of a larger body of research—appropriately called the OUCH Cohort—that looks at caregivers and the vaccination of children from birth to age five. Researchers followed 760 pairs of caregivers and children from three pediatric clinics in Toronto, observing the pairs during vaccination.

“What we found is that in the first minute after the needle, the more parents said coping-promoting statements such as ‘you can do this’ and ‘it will be over soon’ or tried to distract them with talking about something else, the higher distressed the children were. This really surprised us,” said Rebecca Pillai Riddell, senior author, professor in the Department of Psychology, Faculty of Health, and director at the OUCH Lab at York University.

“We found, however, during the second minute after the vaccine when the child was calmer, these same coping-promoting statements resulted in them calming down faster,” said Pillai Riddell. “On the other hand, distress-promoting statements such as criticizing the child or reassuring them that they were fine had no relationship with child distress in minute one, but in minute two the distress-promoting comments were strongly predictive of higher distress in kids. We also showed with preschoolers that the more distressed they were prior to the needle, the more distressed they were after the needle—like a domino effect of previous pain.”

Most Kids Calm within Two Minutes

“Previous research has shown that the vast majority of preschoolers calm down within two minutes after a vaccination; however, about 25 per cent of children did not,” said Ilana Shiff, first author and master’s student in Pillai Riddell’s lab. “We wanted to determine what parents were saying before or during the vaccination appointment that could be leading to these children feeling distressed during and after a vaccination.”

The researchers suggest that parents avoid talking children through their distress in the first minute after the vaccine. Instead, parents should use physical strategies to keep kids calm. A parent might, for example, cuddle, hug, or hold a child’s hand. The idea is to stop telling kids how to cope when they are at the peak of their distress. Waiting until the upset fades a bit leaves children more able to hear and benefit from a parent’s words of encouragement.

Children, it seems, cannot process what we say to them when they are most upset. In one sense, that can be a good thing. They will not hear unhelpful comments that only make things worse. Telling a child she is okay, for instance, when she has just had someone stick a needle into her is wrong and even harmful. That’s because such words make light of a child’s very real feelings. The same is true of ridiculing a child for crying after a shot. The good news is that saying such things right after a shot has no effect. A distressed child, it seems, just will not hear or understand these words during the first minute.

The critical moment comes when the child calms a bit in the second minute after the shot. That is when words matter and can make things either better or worse. Making things better, at this point, means offering encouragement. A parent might say, for example, “You got this. The hard part is over.”

Making things worse on the other hand, means making light of the situation or mocking the child. The negative impact of saying “C’mon, that was just a little nothing,” or, “Don’t be a baby, be a big girl/boy,” increases in that crucial second minute after a shot. Parents should be careful to offer only encouragement at this time.

When kids are scared in the run-up to shots, it causes a domino effect. That means they freak out even before the needle appears and more so after the shot is administered. It seems that pain and fear breed yet more pain and fear in children. For this reason, limiting distress before a shot is just as important as calming kids after a shot.

Having the parent or caregiver stay with and hold the child before and after the shot helps to limit distress. Parents can distract children by showing them videos on a smartphone. Such steps can lessen the domino effect then, and at future vaccinations.

The York University researchers believe doctors can prevent needle phobia by coaching caregivers on how to keep kids calm during vaccination. “This type of data has never been found in preschoolers before,” said Pillai Riddell. “It’s important to understand post-needle reactions at this age because needle phobia and phobias in general start coming on at five to 10 years of age, so understanding how children can be coached and how parents can have a really powerful role in reducing stress post a vaccination is key.”